Redsn0w Jailbreak Tool For Windows And Mac Updated To v0.9.10b7

While the jailbreak loving world has been waiting patiently for the next iOS jailbreak, and have their eyes firmly fixed on any updated regarding it from Pod2g, the iPhone Dev Team have been hard at work as usual implementing additional features and updates to their popular Redsn0w jailbreak tool. 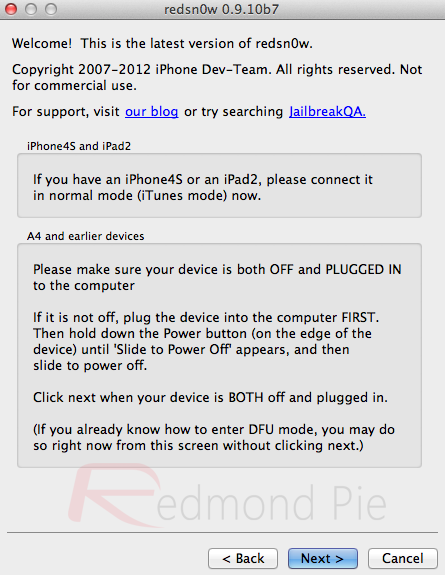 The Dev Team have pushed out the seventh beta of the current Redsn0w release, taking the tool to version 0.9.10b7, meaning that it now comes packed with an array of new features, as well as preliminary support for a very exciting new aspect of the tool, hopefully to come in the next release. The Dev Team have announced their intentions to include built-in support for firmware restores which will negate the need for users to restore their devices through Apple’s iTunes software, meaning that users will be able to handle all of their jailbroken needs from within one application.

The 0.9.10b7 release also brings with it the implementation of the Corona A5 jailbreak for the iPhone 4S and iPad 2, as long as they are running iOS 5.0.1. The Redsn0w improvements also includes the ability for users to re-install the aforementioned jailbreak for those who have managed to accidentally uninstall the untether. One of the biggest aspects of Redsn0w is the ability to stitch together a custom firmware bundle, which is an aspect that has also been improved upon with the new ability to grab saved blobs directly from Cydia. 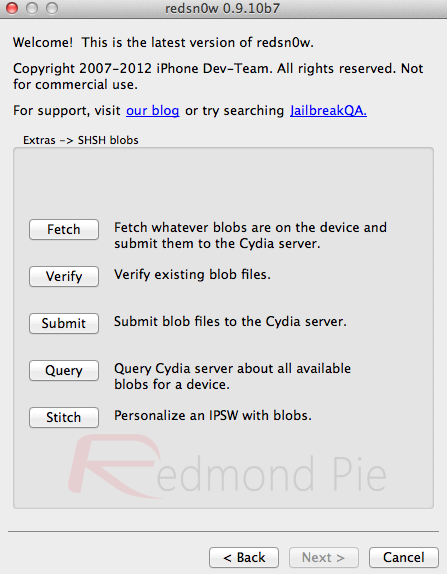 Finally, the latest Redsn0w beta will now provide additional information about the connected device. The example used by the Dev Team relates to the iPhone 3G and 3GS, claiming that it will now display whether or not the 3G has a vulnerable baseband boot loader or whether the 3GS has an old exploitable bootrom. The updated Redsn0w is definitely good news for those A5 users who are sitting on iOS 5.0.1, but the big news has to be the planned restore feature that will hopefully come with the next Redsn0w release.

For the full official release notes, head on over to the Dev Team blog and read update number 2. Alternatively, you can download the latest Redsn0w for Mac and Windows from the links give at the end. When running the Windows version of the software, be sure to run it in Administrator mode to eradicate any issues.