For a company that will ultimately live or die based on the interest shown in their product by the iOS community, it is vitally important to have a strong relationship with Apple Inc. In the case of Anki it can be pretty much be assumed that their bond with the Californian giants is relatively strong considering they were asked to unveil their maiden product – the Anki Drive – during the keynote speech of this year’s Worldwide Developer Conference. That first Anki product managed to generate a lot of interest and it’s now been announced that the innovative hardware will be available to purchase on October 23rd.

For those that may not know, Anki Drive is essentially a racing game that is entirely controlled through the use of Artificial Intelligence (AI). The Drive experience has been likened to actually playing a fast paced racing game in the real world where the objective is to gain as many points as possible by shooting other cars on the track. Single player and multiplayer versions of the game are possible where AI and human controlled cars are swapped in and out as players try to gain points that can be used to upgrade weapons and cars. It all sounds rather fun.

The official Anki Drive website shows that the product will be available in five days and will retail for $199. Those interested in purchasing the product will be able to do so directly through the Anki company website as well as through a number of official Apple Retail Store outlets. As previously mentioned, having a strong relationship with the world’s richest company definitely does come with its plus points. So what exactly will $199 get you when October 23rd eventually arrives? 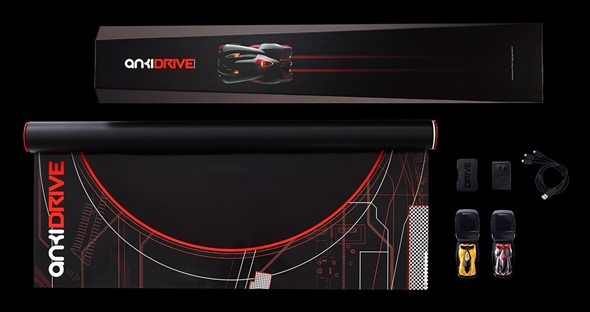 The Anki Drive Starter Kit will ship with two cars to get up and driving with. The Boson vehicle relies on raw speed and intellect to figure out the best way forward, but it also helps that it comes with an upgradeable Gravity Beam to destroy opponents. The second included car in the Starter Kit is the Kourai that benefits from blinding speed and a strong defense that can even fend off tractor beams. The kit itself is finished off with the included Anki Drive track, the relevant charging devices and a tire cleaner to keep those machines in perfect battling order.

For anyone thinking about purchasing this it’s worth noting that certain iOS powered hardware is required. The accompanying Anki Drive app is a free-of-charge download that requires an iPhone 4S or newer, fifth-generation iPod touch or newer or a third-generation iPad or newer.