Whenever Apple take the opportunity to add new frameworks and features into iOS, it always opens the door for jailbreak developers to build new and interesting tweaks that take advantage of the new additions. The release of iOS 6 saw Apple extend their initial Twitter integration to support Facebook and Sina Weibo as part of the new Social framework within the iOS SDK, a move that has resulted in the creation of the QuickShare for ActionMenu package available now on the Cydia store.

QuickShare is a package that allows selected texts, images and URL’s to be highlighted and shared to the three different social networks through the use of the Action Menu that has always been a part of iOS. The tweak works by hooking into the native popup menu that is displayed when a user selects and highlights a portion of text or an image through a compatible app such as Mobile Safari, Notes, Pages or any other app that allows information to be highlighted. 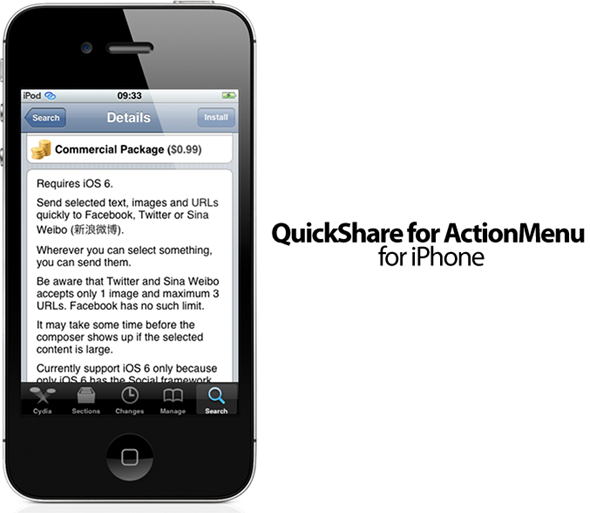 When QuickShare is installed, the resulting popup menu will have additional new options to allow the user to post to one of the supporting networks. Twitter and Sina Weibo currently only allow one image and a maximum of three URLs to be posted in one message due to the messaging character restrictions. It is also worth noting that because this package makes heavy use of Apple’s Social framework, it is only compatible with jailbroken devices running iOS 6 or above. 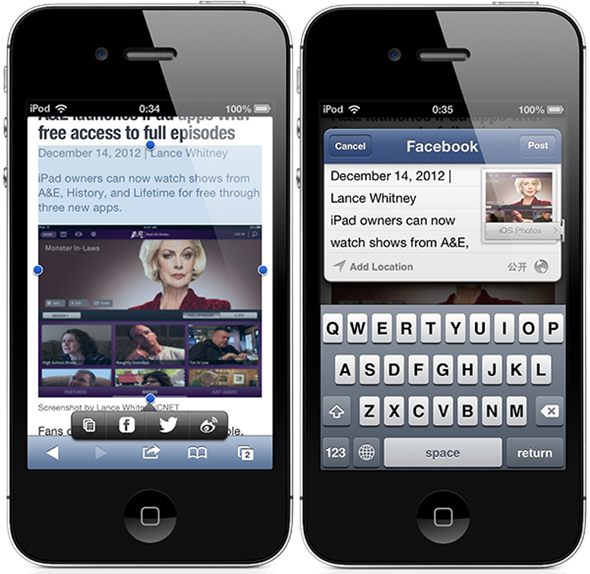 Although social sharing is extremely important to smartphone users, the package itself seems a little unnecessary, considering the small portion of users are on iOS 6 who actually jailbroken, and the fact that the current solution only supports pre-A5 devices and is tethered. A stock installation of iOS 6 also provides users with the ability to share information to the same networks throughout various parts of the system, so it seems a bit of a tweak for the sake of a tweak.

QuickShare for ActionMenu is a commercial package that is available as a $0.99 download on from the BigBoss repository and requires a jailbroken device running iOS 6 or above.