OK, it’s been a pretty big day for Sony already, what with the announcement of the newly announced PS Vita 2013, but the Japanese firm isn’t done there. Also announced today, the PS Vita TV is much more than it may first seem, and it’s going to cost around $100 to buy, too.

As the name suggests, the new box ties in with Sony’s PS Vita console. In fact, when we say that what we actually mean to say is it kind of replaces it. See, if you’ve ever wanted to play a Vita game on your TV, then this is the box for you. Featuring slots for both Vita games and memory cards, the Vita TV takes previously handheld games and displays them on a TV screen, with controls taken care of by a Dual Shock controller. Interesting, no?

It’s not just games, either. Sony’s new diminutive box hooks into its own music and video services, putting it squarely in competition with the Apple TV, too. Twitter and Hulu are also supported, and we can only assume it’s a matter of time before Netflix is in attendance – it’s on everything else, after all!

As if being able to play Vita games on the big screen using a proper controller wasn’t enough, Sony says that its new Vita TV will also be able to remote play games that run on its unreleased PlayStation 4 console. That means, folks, that a PS4 and a Vita TV give you multi-room gaming without the need to buy multiple consoles. Things just got interesting, right?

The PS Vita TV takes up next to no room, either, thanks to its 60mm x 100mm footprint. It even looks the part, so you won’t mind having it out on display alongside the rest of your A/V equipment.

The complete set of specs of the PS Vita TV are as follows: 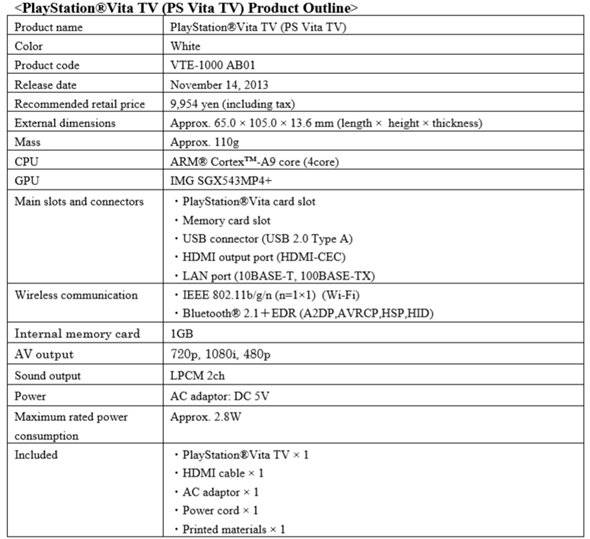 Sony says that the PS Vita TV will go on sale in Japan on November 14th for 9,954 yen – which equates to about $100 in the US – but has not yet confirmed when it will see the light of day in other territories. Another model which will cost around $150 will come bundled with a Dual Shock controller, this is something which you might want to get instead if you’re a diehard gamer. So long as it’s released before or alongside the PS4, we don’t know if we really care. What we do know though is that one of these will be getting added to our PS4 orders ASAP!