PlayStation 4, Xbox One Bundle Prices Cut Down To $250 For Limited Time

If you have a PS4 or Xbox One on your Christmas list, then Santa might be able to save a few dollars this Christmas after both Sony and Microsoft’s consoles received a new, temporary price cut. Starting today, and continuing for the next few weeks, both the PlayStation 4 and Xbox One can be had for a very reasonable $250 apiece.

Following on from deals that saw the same consoles reach similar prices around Black Friday, this new $250 deal not only includes the machine itself, but as they are console bundles, at least one game will be included in that new price. What that game will be may depend on the bundles on offer by your retailer of choice, but no matter which title it is, we expect you’ll be doing OK at this price point regardless. 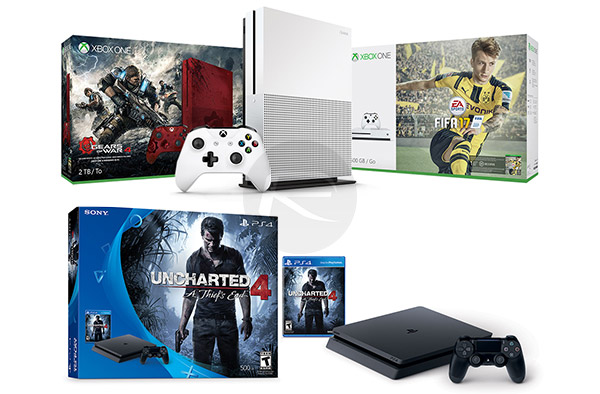 While Sony’s offer applies to the new slimmer PlayStation 4, which has replaced the older model in the market, Microsoft’s offering caters for both the standard Xbox One and the new Xbox One S.

The 4K-ready PS4 Pro hasn’t yet been given the holiday treatment. Trying to work out how long the offer will last for isn’t exactly easy, though. Whilst Sony has been upfront and declared its $250 deal will continue until Christmas Eve, December 24th, Microsoft isn’t as yet putting a date on its own offer.

This could mean that Xbox Ones will be available at a discounted rate for some time yet, or Microsoft could merely have been keen to see Sony’s hand this holiday season before announcing its own deals.

While the PS4 and Xbox One aren’t exactly new to the market, $250 is a great price point for anyone who has yet to jump into this current generation of gaming or, perhaps, wants to be able to play games from both sides of the gaming world.

Whatever your motivation, we suggest you get your hands on one of these now before the price goes back up or retailers sell out.