When a rumor takes hold prior to a big announcement, a few utterances can often escalate into pure scaremongering, and in the run-up to the grand unveiling of the next-gen games consoles, many had feared we were moving towards a generation of so-called ‘always on’ connections being a prerequisite for enjoying any game. Suffice to say, Sony has stepped out and confirmed that gamers can happily enjoy games without an Internet connection, and what’s more, used titles can be played without any fuss.

As anybody who’s been playing games for more than a couple of years will know, part of broadening one’s spectrum and finding out about new genres and titles is the ease in which one can buy a game on the cheap from their local used game store. That, and the ability to share with friends is seen pivotal part of the gaming industry, and while we suspected the PlayStation 4 would kill this off, the official word at E3 speaks a different story. 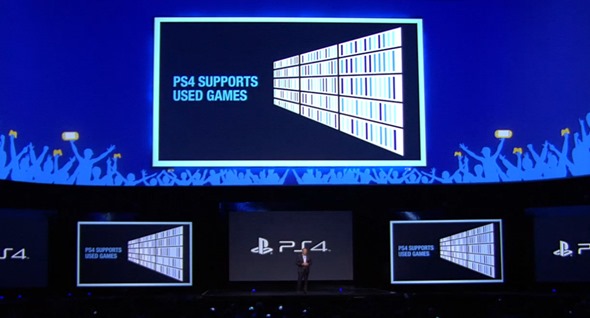 While it perhaps sounds a little too good to be true, the PlayStation 4 doesn’t hide any unpalatable restrictions on used games. On top of that there’s also no kind of authentication, and if one thing is certain, it’s that Sony is trying incredibly hard to win the hearts of gaming fans. And why not?

As well as being $100 more in price, Microsoft’s Xbox One’s used games policy is a bit of a gray area, with games on optical media only allowed to be played the once. What’s more, the person re-using your game will have to have been on your friends list for 30 days, which makes the process a bit of a headache all told. To cap it off, games traded in can only be handed over to resellers that Microsoft has whitelisted, and even then, the publisher / developer would have to have given the title the nod for after sale trading.

So, with no restrictions and a cheaper price tag, the PS4 is certainly looking the more favorable option, and although online multiplayer is no longer a freebie (PlayStation Plus will be required), Sony is definitely winning the game of oneupmanship.

Which console, based on what we have now, has won you over?