How good or necessary (or not) was the Start Screen and the move away from Start Orb was for the future of Windows as an operating system, is a rather different debate, but ground reality is that it has been done. It’s out there now, and you can either take it or leave it, but it won’t change. Now, there is a number of tools that will bring back the good old Start Orb and menu for you under Windows 8, and some of them are completely free, too, but if you start using the new Modern UI screen, it begins to grow on you. While it remains a matter of personal aesthetics, it can’t be denied that there is always room for improvement in almost everything, and in that sense, the Metro Start Screen isn’t perfect. That’s what the Start Menu Modifier application aims to target.

The thing with Windows 8 has been that most of the efforts have been focused on bringing back something that’s rather obsolete, and little attention has been paid to making the Start Screen more useful, or its appearance more convenient. With Start Menu Modifier, that’s the goal – to improve on the look and feel of the new playground. Since in Windows 8, the said screen is used extensively to quickly launching apps (as a replacement for the Start Menu’s ‘search’ function), it makes sense that it shouldn’t be necessary to pull out the whole screen every time you want to find a setting in your PC. If you agree, try out this free tool to open this screen within the desktop mode itself.

The tool has a few settings for you to play around with, along with the option to set a custom hotkey for toggling the screen itself. You’re free to decide the position of the new screen, the display to flash it on in case of multi-monitor set ups, launching Start Menu (Screen) on toggle, running the application at system start up, and closing the settings panel once parameters are applied. Then, you may define a custom hotkey (or combination) to activate the toggling function. 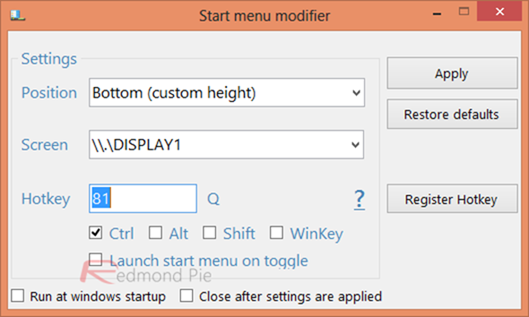 The result is pretty neat; check out the screenshot. 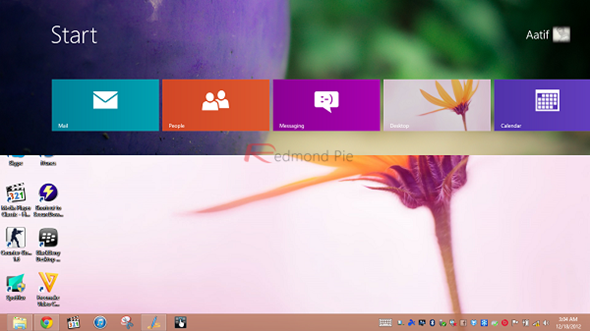 Start Menu Modifier is a portable app, and can be run without installation. What I don’t understand, however, is the rather curious name. According to the source link below, it’s a Windows 8 utility, so it would’ve made much more sense to label it Start Screen Modifier. I guess we’ll have to try it out on a Windows 7 machine as well, just to be sure.