Wow. Ahead of Apple’s earnings call today and the big Mac media event on Thursday, official images of the new 2016 MacBook Pro have leaked showing the highly anticipated laptop refresh from Apple in its full glory.

While Apple tried its best to hide all of the references and assists present in the new OS until the official announcement on October 27, it seems like someone has managed to extract the Apple Pay files from the new OS version which shows off the new MacBook Pro and some of its main features in great detail.

Expected to be called Magic Toolbar, the much talked about OLED touch-bar can be clearly seen in the leaked images, so is the Touch ID which seems to be integrated right into the touch-bar itself and probably doubles as power button as well.

As has been reported a number of times in the past, Magic Toolbar is expected to work contextually in apps, showing different options depending on whichever first or third-party app is running. 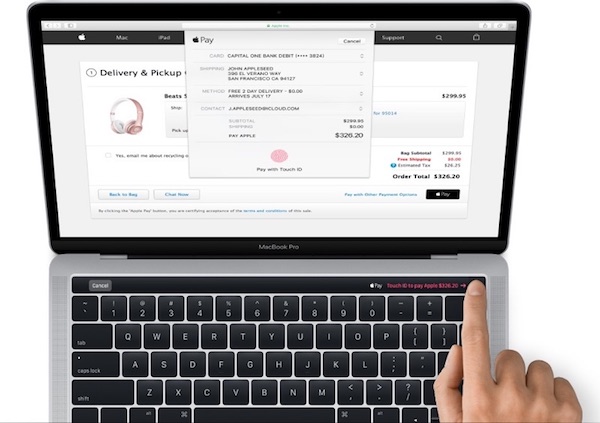 The leaked images also shows an overall design and form factor which is similar to the current 12-inch MacBook, with a new keyboard with butterfly key mechanism, dual-speakers at the side of the keyboard for 13-inch model, redesigned hinge, and more.

While thinness and ports aren’t exactly visible in these images, but rumor has it that the new MacBook Pro will be slimmer than current-gen MacBook Pro and will feature USB Type-C and Thunderbolt 3 ports while ditching SD card slot, HDMI and MagSafe ports.

Apple’s “hello again” media event is scheduled for Thursday, October 27th at 10am Pacific in Cupertino where the company is expected to unveil new Macs and a release date for AirPods.