It still seems like madness that in some cases, brand new Android powered smartphones and tablets don’t get shipped with Google’s latest version of the Android operating system installed upon them. If I was rushing to the store to purchase myself some of the latest hardware, I would expect it to ship with the latest and greatest software available in the market.

For a lot of Android device owners, it sometimes comes down to a waiting game wondering when their specific device will be graced with an update to Ice Cream Sandwich, but for those who decided to part with their hard earned dollar for Samsung’s Galaxy Note (N7000), the update waiting game could be over. Judging by the discussion around the world wide web, it would seem that a number of N7000 users have received the official update notification which blesses their generously sized Galaxy Note with Android 4.0. 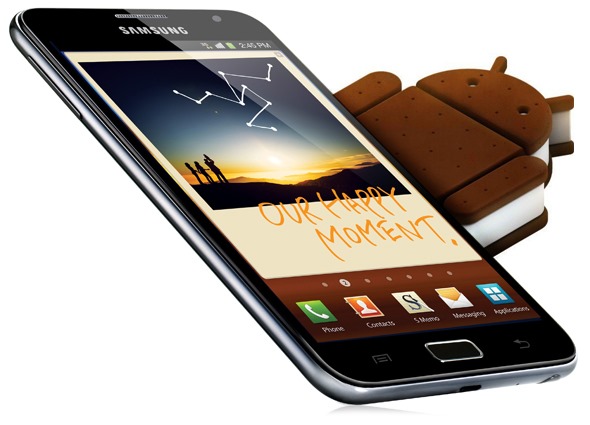 History has shown that Samsung generally push out any OS-based updates on a per region basis, meaning that it is highly expected that certain territories will begin to see the over-the-air update appearing before others. It is also being reported that the Ice Cream Sandwich update for the N7000 is available to download in Germany through the Samsung Kies software. If you are an owner of the Galaxy Note and haven’t got any notification, remember that it could take a few weeks for Samsung to cover all users across the world before you get downhearted. It is also worth remembering that the situation is made even more complex for network-branded Galaxy Note owners, as Samsung and the network provider both have to agree on a release schedule after ICS has gone through vigorous testing. 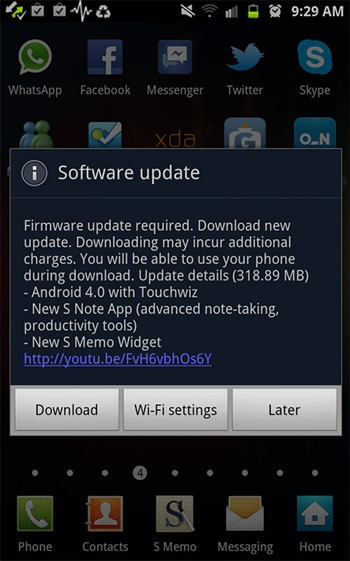 Owners who have started to receive the Ice Cream Sandwich update are reporting that the version number is 4.0.3, which was compiled on May 4th. Once the upgrade rollout is complete, N7000 owners will be able to benefit from Samsung’s Premium Suite of apps, of which they released a video in the middle of last month. Premium Suite brings with it updated versions of the S Note, S Memo and My Story apps, which afford users the luxury of being able to produce engaging creations through the use of the new software.