The Apple TV, in the big bad world of set-top boxes, is somewhat limited in terms of what it can offer a user, and although the fruit company is continually updating the software and striking deals with various big providers, there’s still a strong consensus that in order to get the most out of the little black box, you’re best off jailbreaking.

Unfortunately, this is not an option open to every Apple TV user, notably those in ownership of the latest model, but a neat little trick allowing any user running on stock software to connect to the Russian subscription TV and movie service Unlimovie.tv just goes to show that fun can be had, even if a jailbreak is out of the question.

The trick that makes this all possible is certainly not in the same league as some of the tenacious workaround we’ve seen, rather a simple DNS alteration from within Settings allowing the service to be accessed through the Apple Trailers app. With that said, anything app that can be sneaked in through Apple’s walled garden feels like something of a victory for the people, and much like the mod that offered Plex for Apple TV to one and all just a couple of weeks back, it has been confirmed as working on un-jailbroken devices.

If you’re unfamiliar with Unlimovie.tv, perhaps a little background info is in order. Essentially, the beta service allows users to lock in to Russian digital TV channels free of charge, and while the official launch will bring paid subscriptions, it’s a bit of a free-for-all at the moment.

Apple will likely put the brakes on this rather swiftly, as it so often does, but for the time being, you can access the service right now on your second or third-gen Apple TV by checking out the instructions over at the Unlimovie.tv website.

Please note, however, that you will have to forgo use of the Trailers app while the mod is in place. If you wish to access Trailers once more, simply change your DNS settings to automatic and the app will be reinstated. 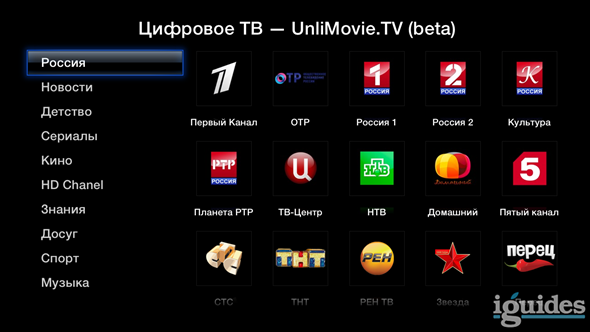 On the topic of a jailbreak, it’s looking less and less likely the third-gen Apple TV will be seeing the jailbreak many users so desperately crave. Those who simply cannot enjoy the Cupertino company’s set-top box without unrestricted access are better off grabbing one of the second-gen variants, although this will not only be limited in certain areas (maximum of 720p resolution, for example), but it will actually cost you more than a brand-new third-gen.

Although the jailbreaking of iPhones, iPads and iPod touches will always be of a higher priority, one hopes the days of enjoying a jailbroken Apple TV aren’t already behind us.

If you’re interested in getting the channels up and running on your Apple TV, go here and follow the simple guide that is posted. It’s easy to follow and be sure to drop your thoughts in the comments section below if you manage to get it working.