With the release of any new piece of consumer technology, especially an eagerly anticipated release, we expect a certain amount of rumors and speculations going side by side with it. However, as the conjecture flies in from all different angles, it sometimes becomes difficult to establish what is actually based on some form of reality and what is purely fabrication. The release of the next generation Xbox console is hot news, and rightly so in our opinion considering the current 360 is one of the world’s most popular consoles with millions of gamers around the world using it on a daily basis.

The internet has thrown up some pretty believable rumors when it comes to the next Xbox, or the Xbox 720 as a lot of people believe it will be called. We have heard that Microsoft is planning to make the console up to a staggering six times faster than the current model and it could feature some kind of digital video recording capabilities as well as an integrated Blu-ray player. The DVR and Blu-ray rumors seem pretty much nailed on and even the six times faster claim has merit, considering the advancements that have been made in processor technology in recent years.

The latest hearsay from the world wide web relates to the possible inclusion of a Wii U type controller which will feature a high definition, centrally placed screen with the normal 360 control stick and buttons placed on the either side of it. The latest print issue of Xbox World states that the controller will be a "matt black media hub with a mission to bring games to life in your living room with augmented reality, directional sound, and a four-player, finger-tracking Kinect". 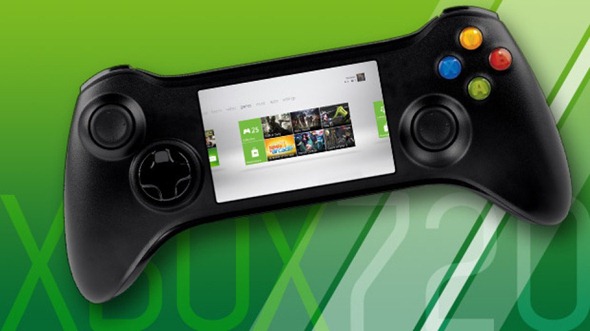 The aesthetics of the alleged controller will be something that will be a cause for concern for many Xbox fans, considering the current generation of controllers are hardly on the slim side. The company is rumored to be looking to produce a design similar in size and fashion to the PS Vita device rather than the huge Wii U. Considering the fact that the proposed ‘720’ is going to have digital video recording abilities, it stands up to a reason that the new touchscreen-based controller could be used as a remote for any TV-watching features the console may ship with. Whether or not this alleged touch screen controller will ever happen remains to be seen. With the company putting a lot of emphasis on upgrading the motion detecting Kinect device; I just wonder whether they will put additional resources into producing a controller which could possibly turn out to be nothing more than a hindrance when attempting to play standard, control-based games.