After going through a period of public beta testing, Microsoft has started to officially rollout the planned changes to their Xbox LIVE service. As is usually the case with large scale changes like the ones being pushed to the LIVE service, the updates will be gradual and will start to be noticeable to different members in different territories over the next seven days.

The first seven days of the update period should see the fantastic Xbox LIVE changes being rolled out to over three million Xbox 360 consoles around the world. The Xbox team is speculating that the rest of the rollout process will happen in the following weeks, with all compatible consoles being updated within that time period. Users are being invited to sit patiently and keep checking to see whether their service has been updated or not.

As part of the update; a large number of features and services have been improved and refreshed to bring a much better and more powerful user-experience to LIVE subscribers. The service formerly known as the Zune Video Marketplace has been rebranded as Xbox Video and will offer a plethora of television shows and high-definition movies that can be either purchased or rented and streamed instantly. Apart from Xbox Video, Xbox Music is also a part of the update which was detailed thoroughly just yesterday, you can read about it in detail here. The new Pinning feature allows users to pin websites, movies, TV shows, games and more directly to the home screen for easy access.

Regardless of whether you love it or hate it, Internet Explorer is also a part of the Dashboard update. The browser allows immediate internet connectivity with seamless HTML5 playback on the big screen and is advertised as one of the benefits. The user-interface of the Xbox 360 Dashboard has also been refreshed that includes additional tiles, a channel dedicated to television and movies as well as a dedicated sports area that will only be available to United States based subscribers. 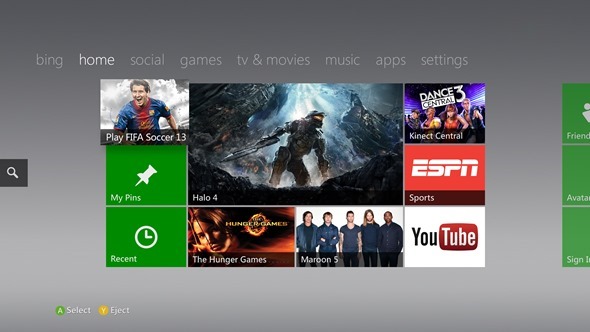 Rotten Tomatoes integration is something that we have seen recently with Apple and their Siri digital assistant as part of iOS 6, and that is now coming to the Xbox. The new Recommendations and Ratings area allows users to instantly find new content that has been selected based on things like previously viewed media and what any LIVE connections are viewing. Content can be rated by the users to warn other potential purchasers of any horrendous movies as well as being able to quickly see the Rotten Tomatoes ratings .

Powerful search features and an overhaul to Voice Search finish off what should be an extremely well-received and large update. Users can now search via genre of content through Bing Voice Search as well as having the Kinect voice search feature available in nine additional territories. France, Germany and Mexico are just a few of the countries that now use the powerful feature.