Microsoft has been preparing its Windows Blue updates for quite a while now, and screenshots of some of the latest developments have begun to emerge via several sites dedicated to the Redmond company’s flagship operating system. The screenies reveal two different builds of what is referred to internally as Windows Blue, and although build numbers are unconfirmed, TheVerge has learned that Microsoft recently pushed its NT kernel up to 6.3.

This is noteworthy because, Windows Vista carried NT kernel 6.0, Windows 7 stood at 6.1, and Windows 8 is 6.2. Thus, the transition to 6.3 would imply a similar level of changes as occurred between those respective versions. The change at such an early stage suggests the next version will be arriving much sooner than Windows users will be used to, and with no "Windows 9" in the pipeline according to TheVerge‘s sources, Blue stands tall as the next major update.

Microsoft, it is thought, is looking to move away from the current 3/4/5-yearly updates with Windows, and instead groom users into expecting annual, low-cost iterations, akin to the way Apple releases yearly updates to OS X. In another change to the former pattern, the naming scheme will also be altered, and instead of being labeled, as one may expect, Windows 9, it currently operates under the moniker Windows Blue.

It will be interesting to see how Microsoft plays the new system of upgrades. Windows users are accustomed to digging into their pockets every few years, with meager upgrades arriving in the form of service packs. In order to persuade users to part with their hard-earned cash, even if it is small upgrade fee of $20 or thereabouts, there will have to be some significant, indeed visible changes on offer. 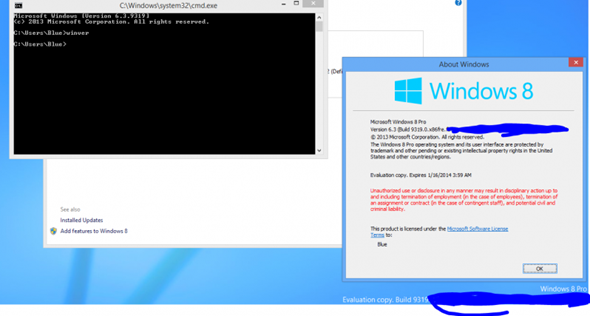 From this latest kernel bump, it certainly looks as though Microsoft will be delivering some significant changes. The screenshots themselves do not reveal what kinds of changes we could be seeing, but TheVerge‘s report also suggests Windows Blue is designed for a new fleet of hardware types, including the increasingly popular 7 and 8-inch tablets.

Windows Blue is expected to make an appearance sometime later this year, and will begin to ease users into the annual update system.