A new piece of malware, which is capable of infiltrating various specifications of Android-based devices, has seemingly hit a new low in terms of sheer malice. Once installed, the infected device is abruptly disabled, showing only a pop-up message that demands significant sums of money be parted with by the victim.

But — believe it or not — things manage to get even worse. Not only does the malware look to readily extort cash from its victim at will, but also, dreams up criminal charges pertaining to the viewing of illegal / adult material. The hackers behind the continual wave of Android-targeted malware seem to be getting more cunning and devious in their methodology as time progresses. But while the recent Bitcoin mining tool, for example — which slipped under the radar by only operating when a battery was charging — was acknowledged as devious, this is an abject example of just how downright nasty these malware makers can get in the ongoing quest to reach into your wallets.

You might think that this particular piece of malware, identified as Android-Trojan.Koler.A, couldn’t possibly sink any lower. But, of course, it does. By logging your location details, the message outlining the fabricated charges are tailored specifically to where you reside, lessening the likelihood that you’d be able to see right through a more generic effort.

Once you’ve been hit, you’re completely locked out from your device, and even though the sum demanded — mostly in the region of $300 — can help to restore normality once again, it’s certainly one of the most alarming hacks we’ve seen to date. 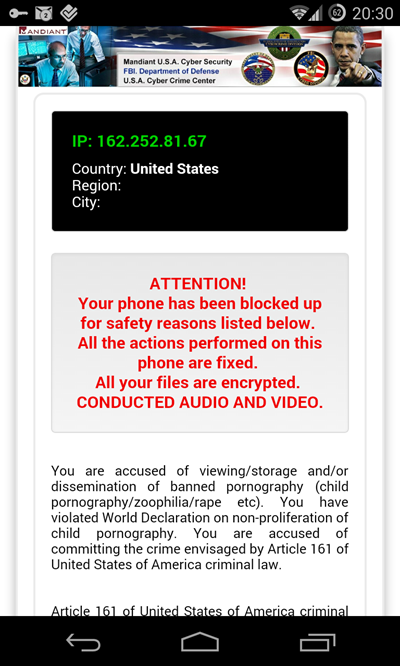 Those duped into paying do so through untraceable payment mediums such as Paysafecard, and thus, the entire operation will be very difficult for authorities to latch on to.

So-called "ransomware" of this kind has been commonplace on desktop PCs over the years, and the practice looks to have been perfected in order to sting mobile users as well. The APK that installs the trojan, which is disguised as a "premium" content streaming app on some adult sites, has already affected dozens of handsets, and even though you can probably guess what you need not do if you don’t wish to get stung, be sure — as ever — to keep a close eye on anything you install on your device.