Apple today patented a technology which hints at the fruit company’s potential interest in an automatic tilt correction feature for the iPhone.

The technology makes use of integrated sensors in the iPhone. Sensors such as the gyroscope, compass and accelerometer would ascertain the orientation of the iPhone when a photograph is being snapped and then, using this data, the photo would be processed and tilt-corrected.  The tilt-correction will either be applied automatically or be applied the user once they have taken the photo.

To understand how tilt correction works, consider the image pasted below: 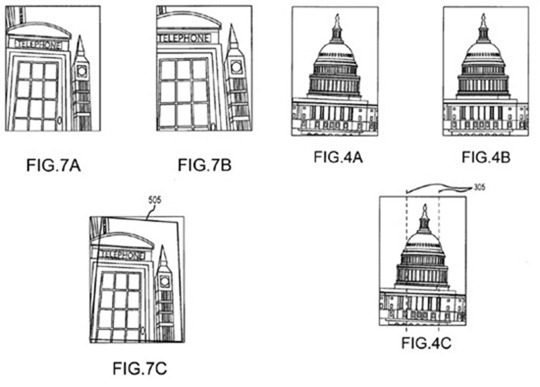 Same goes for the photograph of the United States Capitol in Fig 4A. The iPhone would make use of the data stored by gyroscope, compass and accelerometer to apply tilt-correction, with the final tilt-corrected photograph being Fig 4B.

The patent states that its applications are “broad” and could be applied to desktops, wristwatches and integrated cameras besides mobile phones and dedicated cameras.

It was filed on 22nd December, 2009 and credits Jason Chen, Brandon Slack and David Simon as the brains behind the technology.

Apple’s iPhone 4 is one of the most popular devices used to take photographs, as shown by data released by photo-sharing website Flickr two days back. With its surprisingly high quality photographs and long-lasting battery, the iPhone 4 is becoming the go-to replacement for point-and-shoot cameras when it comes to casual photography.