The productivity of jailbreak developers may have suffered a bit in recent times due to the length of time taken and the complexities involved in producing an untethered jailbreak, but that doesn’t mean that Cydia isn’t full of fantastic tweaks and packages. Over the years, developers and visual concept designers have provided us with a number of packages and designs that involve new and innovative ways to access specific and commonly used system settings on an iOS device. To that list of concepts we can now add the Lockscreen Drawer that is currently getting attention around the interwebs.

The concept involves around granting users the ability to access commonly used system setting toggles directly from the lock screen of the device, courtesy of a hidden drawer that can be dragged into place through the use of a one finger drag gesture. The visual design of the concept will already be familiar to any iOS user who is running a device with iOS 5.x (or up) installed. Apple has already included the visual groundwork for the concept by providing the scrubber aesthetics that are used to drag down a group of collapsed notifications. 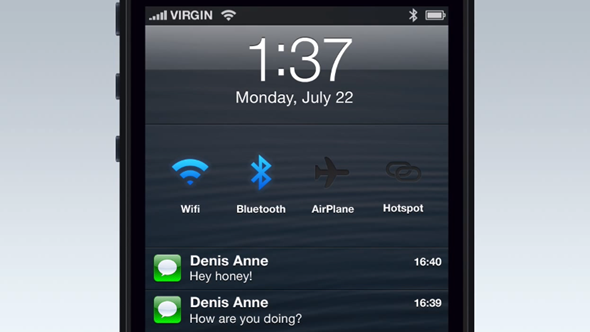 The designer of the concept imagines using the same Apple inspired design, but rather than dragging down notifications, the gesture would see a clean and usable drawer being presented that would contain a number of icons that each represent a different system setting like Bluetooth, Wi-Fi, Data, Personal Hotspot etc. Although the visuals in the video only show off four icons on the display at any given time, we would imagine that the drawer interface itself would have a horizontally scrolling panel embedded in it to allow the user to scroll through multiple setting options.

There isn’t a great deal of information attached to the concept to suggest if it would allow the user to change (or replace) the toggles according to their own liking. In the past we have seen a number of ideas that started out as simple concepts growing to become fully functional and extremely popular packages on the Cydia store. One of the most recent has to be the Auxo offering which re-imagines the multitasking switcher and has since gone on to be considered one of the best tweaks of 2012. Who knows if this lock screen drawer concept could materialize in real-life?