NASA’s Curiosity Rover Checks In On Foursquare From Mars, One Check-In Closer From Becoming Mayor [IMAGE]

NASA’s Curiosity rover, which recently saw pop star will.i.am broadcast from on the surface of Mars, is quickly becoming the master achiever of unprecedented feats, and now holds acclaim as the first to check-in from another planet, courtesy of Foursquare.

Granted, it’s not the first time a check-in has been made from outside planet Earth, but it’s a pretty amazing achievement, and while the 2010 Expedition 25 check-in at the International Space Station by Commander Douglas H. Wheelock was the first human check-in from space (unlocking the NASA Explorer Badge), this is the first time it has been done from outside the earth’s atmosphere by a non-human machine.

If you’ve been living under a rock for the past few years and as such, have never heard of Foursquare or aren’t sure what it’s about, perhaps a little background info is warranted. In short, it’s a mobile-based social network allowing you to check in to just about anywhere you like, earning badges in the process. As well as badges earned for "First Restaurant," ‘First Rail Station," "First Theater," "First Airport" and others, you can accumulate points and compete against your Foursquare friends. You can leave comments or tips regarding anywhere you may have checked in – enabling others to gather an idea of the experience you had or things they should check out or avoid – and all in all, it’s a pretty fun way of sharing your travelling habits with others. 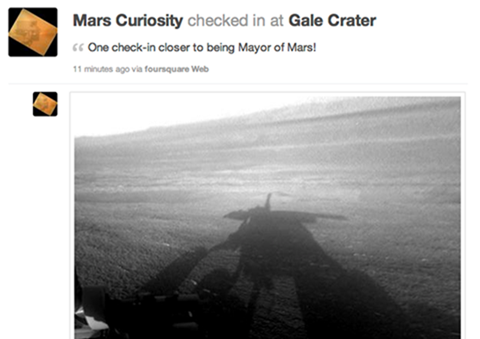 Those checking in most frequently become the "Mayor," and Curiosity has already showed its sense of humor by stating it is "One check-in closer to being Mayor of Mars." For those of you with a trip to Mars on your to-do list, Curiosity has rather considerately left a tip at the Gale Crater which recommends any visitors ensure they pack robust shoes and a sure supply of oxygen. Very funny indeed. 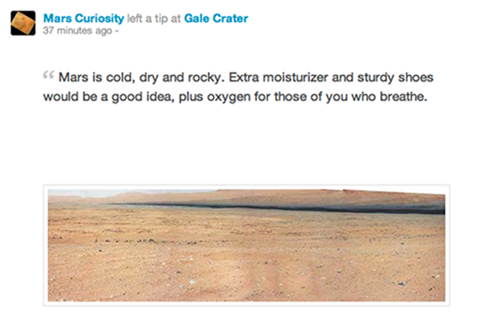 I personally find such news pretty fascinating, and have enjoyed watching and commentating on the rise of Foursquare over the past couple of years. If you have yet to try out Foursquare on your mobile device, then please do, and let’s hope NASA keeps delivering these weird and wonderful check-ins from all areas of the galaxy.