Generally speaking, the majority of us are concerned about our security and privacy at all times, and since most, if not all of us are rocking a mobile device of some description, the same rules apply therein. Whenever software makers put our sensitive data into potentially precarious positions, we call for heads to roll, however, despite small oversights by software developers potentially leading to dire consequences, the onus is just as much on us to arm ourselves against situations which could see our data accessed, stolen or used for unscrupulous ends.

mSecure by mSeven Software is the kind of application every iOS user should have installed on their device. I’ve reservations about labeling it a mere “password manager,” because it does quite a bit more than your generic credential-storing app. Boasting ultra-secure 256bit blowfish encryption, it protects all of your essential data, including account numbers, usernames, and passwords, and the in-built password generator will render your sensitive info water-tight from those prying eyes. 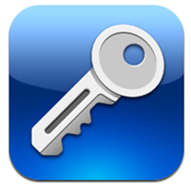 Like any secure app, it can be set to auto-lock, and includes a free backup utility which will keep your data safe and secure at all times. If you think somebody might try and guess your passwords, you can call upon the optional self-destruct feature, so once you’ve downloaded and installed mSecure, you’ll feel a lot more at peace knowing you’ve taken a big step in protecting your data. 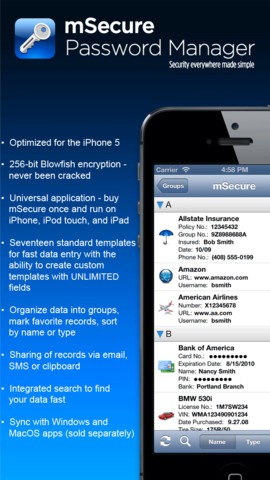 iOS has, much like its desktop counterpart, built up something of a reputation as a safe haven from the spike of malware, and general non-niceties plaguing rivaling Android, but as the FlashBack outbreak on OS X taught us earlier this year, complacency has no place when it comes to security. Apple was forced to remove its claim OS X “doesn’t get PC viruses,” and even though Apple’s mobile operating system has yet to see any form of digital attacks, you can ill afford to rest on your laurels on a device which, if lost, could in most cases present a individual with an invaluable tool. 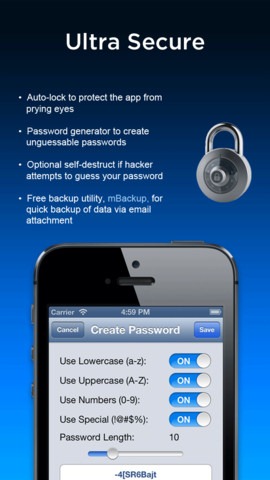 mSecure is the complete package, and although it’ll set you back $9.99 at the App Store, it is, as I mentioned earlier, the added layer of security everybody should have.

(Source: mSecure for iPhone and iPad on App Store)