The first wave of MFi (Made For iPhone) accessories may not win awards for design innovation or aesthetic beauty, but they did manage to highlight the power of what is possible with mobile gaming, and draw serious attention to Apple’s Game Controller APIs that launched as part of iOS 7. MOGA, the company behind the MOGA Ace Power iOS 7 controller, has taken on-board the lessons learnt from the initial launch and have gone back to the drawing board to build their next MFi product, as shown in the company’s official teaser image below.

The released image is clearly designed to whet the appetite of iPhone and iPad users who just love mobile gaming more than anything else. We can’t magically pull out the full specifications or capabilities of the hardware from this one image, but what we can do is make a few educated guesses about what we can see. The physical form factor of the new MOGA controller shows that it falls more in line with the design of traditional controllers that we are used to seeing with consoles like Sony’s PlayStation. There’s also the biggest hint yet that the controller will be compatible with all iOS devices capable of running iOS 7.

The button located to the right hand side of the left analog stick clearly displays a familiar looking Bluetooth icon, pointing to the fact that this latest creation will offer wireless compatibility. MOGA’s Ace Power controller relied on a connection being made to the iPhone or iPod touch directly through the Lightning connector, meaning that it only worked with a small number of iOS devices. The introduction of Bluetooth means that the users won’t be required to "dock" their device into the controller. It also opens the controller up to iPhone, iPad and iPod touch users with an iOS 7 device. 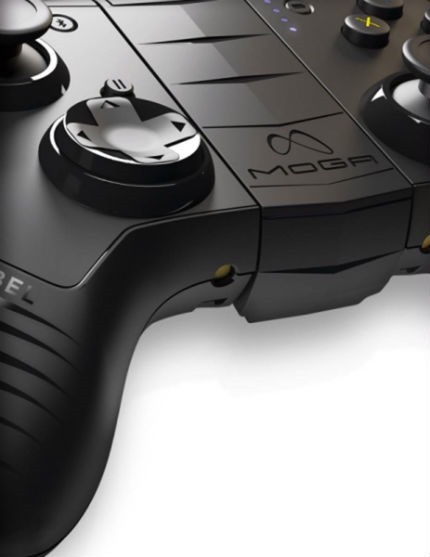 There isn’t a great deal more information that we can get from this teasing image. The controller looks to contain everything that we would expect from a device of this type, including double analog sticks, a multi-directional pad and the obligatory four action buttons on the right hand side.

It seems like a rather bizarre twist that the consumer technology industry has come to the point where companies are posting images of a game controller, but hey, there’s obviously a market out there for this sort of thing. We’ll bring availability and pricing as soon as we know more.