MINIMETEO Is A Beautiful, Clean And Minimalistic Weather App For iPad

Not sure about you guys residing in various parts of the world, but here in the UK, the weather is quite a big deal – primarily because summer usually occurs for a few hours each year, while the cold, wet and dark period is an almost permanent fixture.

Waiting with bated breath for the weatherman to decide what’s going to happen is now a thing of the past thanks to our smartphones, with each of the big three ecosystems offering some form of weather update application by default. Very basic, the App Store, Google Play and Windows Phone Marketplace have plenty of decent alternatives, offering in-depth coverage often spanning several days, and although not everybody is a sun and rain aficionado, knowing which game the elements are playing is often important when planning ahead – something also usually done on a smartphone or tablet. 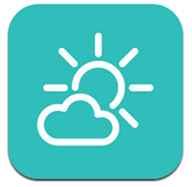 Most of the apps available over at the aforementioned stores are pretty similar and generic. Frequently featuring an HD moniker, they offer heavy, almost cluttered interfaces which is always an off-put. Here at Redmond Pie, we like our minimalism, and they don’t come much more so than MINIMETEO for iPad. 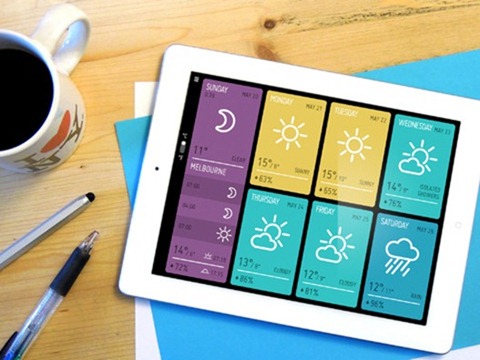 Taking full advantage of the third-gen iPad’s sumptuous Retina display, it offers the clean-cut lines and tiled interface that has made Windows 8 such a big hit, and although you mightn’t have considered a weather app for your Apple tablet in the past, this one may just change your mind.

Instantly eye-catching, the colors utilized are all rather unorthodox for any app – flitting between mustard yellow, misty lilac to turquoise, and surprisingly, they seem to compliment each other rather nicely. You can compare your local weather with that of various other landmarks (here in Britain, such an arrangement usually only serves to depress, but I digress), the whole app knits together very nicely indeed. 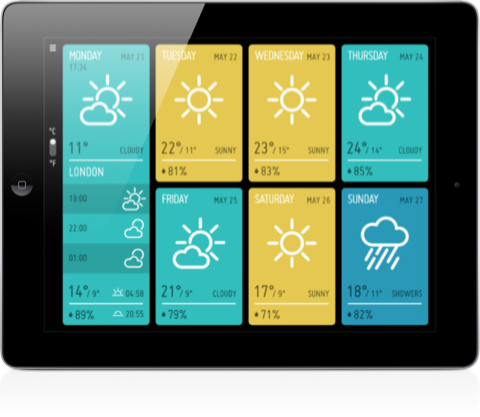 As well as climate conditions forecast for up to 6 days, sunrise and sunset times, general humidity percentage and of course, temperature, there’s really not much else to say about this app. Its strengths are most certainly in its finesse and violent simplicity, and if you’re an iPad owner, this would make a nice addition to your home screen.

It costs just $1.99, which is reasonable given that iPad apps are invariably higher than their iPhone and iPod touch counterparts, and having tested it out on my own 3rd-gen iPad, I highly recommend you give it a try.