The past week has been relatively busy for Microsoft, with the grand unveiling of the all-new Windows 10 operating system, but while the upcoming OS will no doubt consume much of the company’s time and resources over the next six or so months, it’s not the only exciting product currently in the works from the software maker. In fact, Microsoft Research has been developing a much more compelling and innovative creation, which takes Smart Cover technology to a whole new dimension in terms of capabilities, and although the tablet industry is considerably fast-moving one as is, we’re still particularly enthused about where this effort may eventually lead.

Known as FlexSense, the flexible, transparent sheet is packed with tiny sensors, and when manipulated, every movement is replicated on-screen with unprecedented levels of accuracy. As well as briefly explaining how FlexSense works in a short clip, Microsoft dazzles us with numerous situations that technology like FlexSense could really have an effect, and given the current emphasis on pro-level tablets across the industry, FlexSense’s capabilities are seemingly endless. 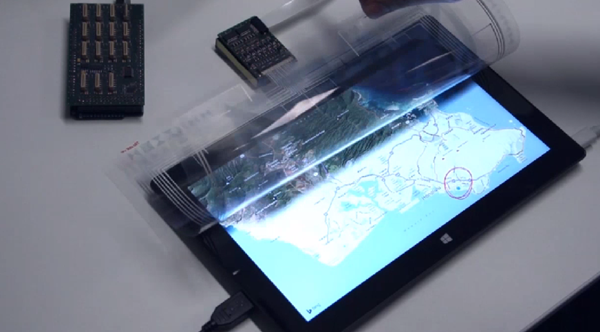 For example, as demonstrated in the video, one could use the FlexSense as a real-life filter when photo editing, peeling away the cover to reveal the original snap underneath. Same goes for crossword addicts, who could subtly roll the FlexSense back to gather a hint of a particularly tricky answer.

The real clincher of FlexSense’s demo, however, is the glimpse of how it could impact gaming. As showcased towards the latter stages of the clip in the "magic carpet" game, it’s the perfect accompaniment to the growing number of titles that rely heavily on physics, and beyond our own, consumer-level interests, there are numerous sectors where FlexSense could prove game-changing.

From doctors’ surgeries to academia, there’s quite a lot to be getting excited about here, and given that FlexSense is still in development, there’s still ample opportunity for improvement.

Be sure to check out the video below, which covers the main details of how FlexSense works as well as highlighting the situations in which it may be useful, and as ever, do share your thoughts and opinions via the usual channels.