In order to reassure buyers that they aren’t purchasing a PC in vain – with Windows 8 on the horizon and all – Microsoft will be conducting a special promotion (as Mary-Jo Foley revealed last week) during which they will provide Windows 8 Pro to buyers of Windows 7-based PCs (on or after June 2) for a low cost. But how low? Today, Paul Thurrott reported that he’s hearing word from his sources that this promotional offer will be priced at $14.99.

For obvious reasons, Microsoft does always offer a promotion, as Mary-Jo noted. I recall them doing something like this for Windows 7. But, things are different now as there are only two consumer SKUs with Windows 8, and Microsoft have chosen to bump consumers up to the most feature-packed and expensive SKU instead of matching them to the closest (which, in this case, will just be Windows 8) as they have done in the past. And this offer isn’t just limited to if you buy PCs running Windows 7 Home Premium, Business, or Ultimate; even purchasers of PCs that run Home Basic will be eligible for this offer at the same cost of roughly $15.

This deal will last for a considerable time as well, so it won’t just be a way to push people to purchase PCs at around the time the company drops the Windows 8 Release Preview. Reportedly, the deal is set to last from June 2nd all the way through January of 2013, at which point most PCs on the shelves will be running Windows 8 anyways. When asked about the offer, Microsoft representatives declined to comment. 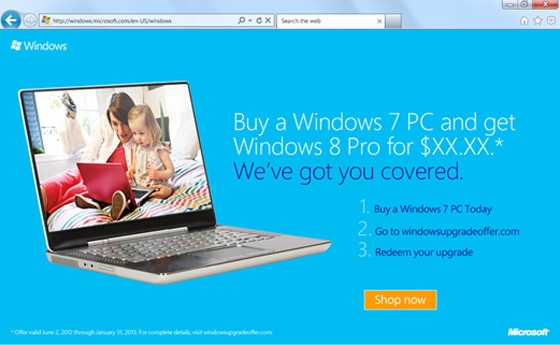 Right as Windows 7 was about to be released in June of 2009, Microsoft kicked off a similar offer where buyers of then-new Vista PCs would receive a free upgrade, but only to the SKU that best fits what they already had pre-installed. Microsoft hosted a slew of other offers to get people upgraded to Windows 7 as well, including one where Windows 7’s two main SKUs – Home Premium and Professional – were offered at half their normal retail cost, and another where a Family Pack – 3 licenses – of Windows 7 was up for grabs at a price point that was only a little more than what one license would normally cost.

So, with that being said, there are sure to be a slew of promotions and great deals on top of the upgrade offer with Windows 8 as it nears its release. What will be interesting to see, however, is if Microsoft diminishes the normal sale price point at all.