Microsoft’s Office for iPad was released not too long ago, after much wait for the famous Word, Excel and PowerPoint app suite coming to the amazingly-popular Apple tablet. We looked at the new Office suite in quite some detail, and found it totally worth it, except for the fact that Microsoft’s pricing model didn’t really make much sense considering how similar (and better) offerings were available for free over the iTunes App Store. Now, the software giant has released its first notable update to Word, Excel and PowerPoint for iPad, and unleashed some worthwhile changes to the entire suite. Let’s take a look at them right past the jump.

The first major improvement is applicable to all three apps, which is the much-needed AirPrint support. This basically allows you to send files for printing directly from your iPad over the air to an AirPrint-enabled printer. How the printing is done across the three apps, however, is slightly different. With Word, you can print an entire document (including markup, optional), while on Excel, selected range, entire workbook or a specific worksheet can be printed. PowerPoint, likewise, allows sending specific slides to the printer or the whole document, depending on your choosing.

Next, Excel got the Autofit feature which basically improves how content looks on your iPad. What you can now do is adjust the width and height of multiple rows and columns at once to enhance visibility on the iPad’s relatively smaller screen. It is a little fiddly to get working properly, and might require multiple taps but the results are worthwhile. 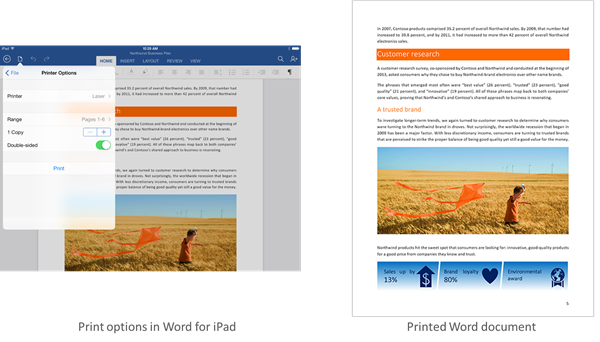 The enhancements to PowerPoint for iPad are the most noteworthy, in my opinion, with the introduction of SmartGuides that allow you to align pictures, shapes etc. for a perfect fit, using visual guidelines on the screen. That’s one of the biggest requirements that you can ask of a productivity app, and we’re glad Microsoft had the good sense of bringing it in the first update. 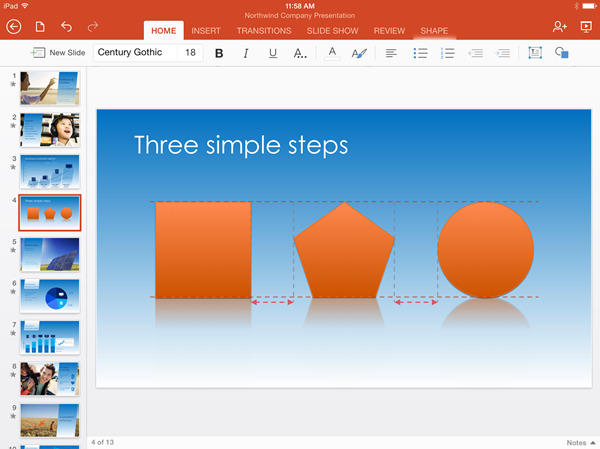 The changes are really useful and the update is appreciable. However, the pricing model is still something that Microsoft should reconsider, since Apple is continuously improving on its iWork suite as well. Let’s see if the next updates bring any changes on that front.

The update is available for free at the iTunes App Store, for all the three apps.