There is some extremely good news for video games fans out there coming from Microsoft, as the Redmond based company is getting into the holiday season spirit early by expanding their Xbox 360 console subsidy deal. You may remember that the original reduction deal first made an appearance earlier on in the year when Microsoft announced that consumers could purchase a 4GB Xbox 360 console for $99, with a monthly charged two-year Xbox LIVE subscription from participating stores.

Although the original deal managed to wet the whistle of potential console owners, it was quite limited in the fact that it only covered the 4GB Xbox 360 model and was limited to just 16 official participating Microsoft Stores. If either of those things were holding you back then green lights should be flashing as the deal has been extended to include a 250GB Xbox 360 console for the same $99 price tag. The more adventurous among us can also opt to throw the Kinect motion detection hardware for an additional $50.

The same rules apply to the extension of the offer, anyone wanting to purchase the Xbox 360 for the $99 or $149 reduced price must also sign-up for a two-year Xbox LIVE Gold membership that comes with a recurring monthly charge of $14.99. There hasn’t been any official confirmation yet that the deal will be extended to additional retail outlets but the official holding page for the offer on the Xbox website suggests that the list will be updated and extended to give consumers additional choices. 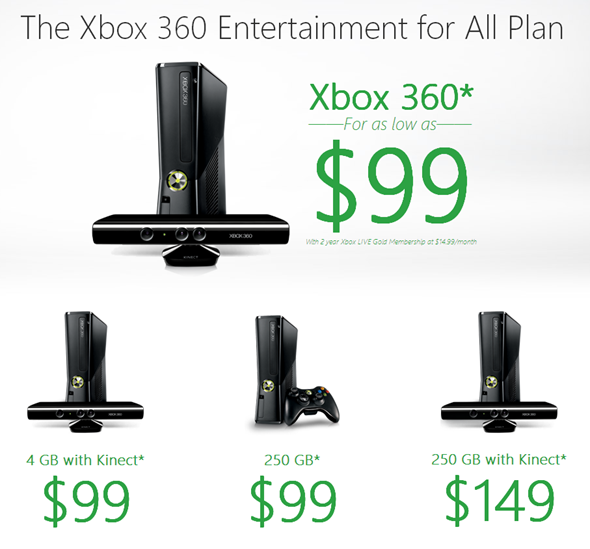 A large number of gaming fans who actually purchase an Xbox 360 invariably go on to subscribe to Microsoft’s online LIVE service anyway, so it would seem to be a fantastic deal to be able to grab a 4GB or 250GB console for just $99. The additional $14.99 will make sure that subscribers get access to great online content as well as multiplayer gaming features that can be enjoyed by friends and family members. Microsoft is also pumping large resources into their LIVE service, meaning that additional content will become available going forward.

My only question: why anyone would choose to snap up the 4GB console for $99 when they could throw in an extra fifty bucks and get the 250GB variant with the fantastic Kinect hardware? Check out the official Xbox subsidy page for more information on participating retailers when the information becomes available.