Twitter’s iOS and Android native app offerings came under fire when they announced a complete redesign earlier this year. They removed established power user features that were first introduced in the Tweetie iPhone app (that Twitter acquired). This resulted in many folks jumping ship* to third party Twitter apps.

Now, Twitter is doing their best to keep the new design while bringing back the power user features that were lost in the major update to version 4. 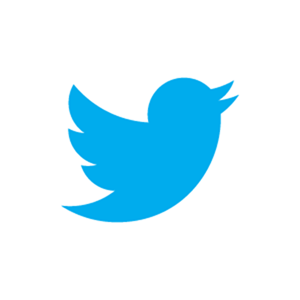 This piece of news was actually leaked in a strange way. The redesigned App Store in iOS 6 has a problem where it sometimes shows up release notes for unreleased, upcoming versions of an app. This happened previously with Instagram and has now happened with the iOS Twitter app.

The list of new features is rather impressive. It brings some features from the desktop website to the mobile app, improves notifications and enhances the overall user interface.

Let’s discuss the major new features first. The enhanced Tweet view, which allows users to (pre)view linked content within tweets on their timeline, will be made available on the upcoming iOS app. Twitter will curate tweets and accounts to bring the finest tweets and accounts to your attention. Push notifications are now more powerful, allowing you to receive notifications for when specific users tweet. When using the app, notifications won’t take over your screen and will be displayed ambiently. 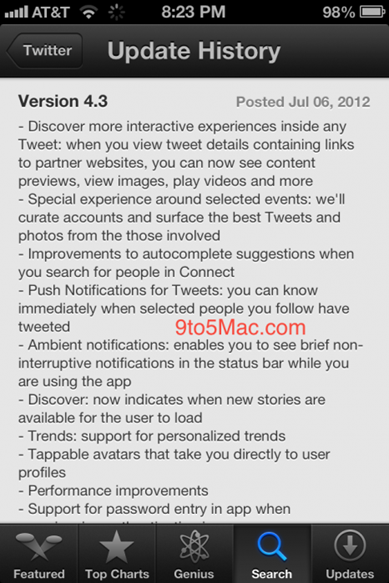 Minor feature updates include improved username auto completion in the Connect tab, Personalized Trends, improved overall performance, bugfixes, UI enhancements (tapping a user’s display picture will take you to their profile, for example) and “many other tweaks, polish, and bug and crasher fixes”. Last but not least, the Twitter app will now use the new Twitter logo.

This is one of the bigger app updates we’ve seen from Twitter in recent times. We have no release date for it so far. We’ll let you know as soon as it releases.

*Tweetbot for iOS is one such app which is currently the go to app for power users. I use it myself!