The number of connected devices in the world is growing, month after month, year after year. You really can’t look at Kickstarter, or attend something like CES, without witnessing the introduction of yet more intelligent devices based around smart Internet connectivity.

And that’s not a bad thing, especially when we witness connected devices like the LaMetric Time, a piece of tech which not only functions as a smart connected clock + bluetooth speaker for home and business, but which also gives access to important information from Internet with a single glance. 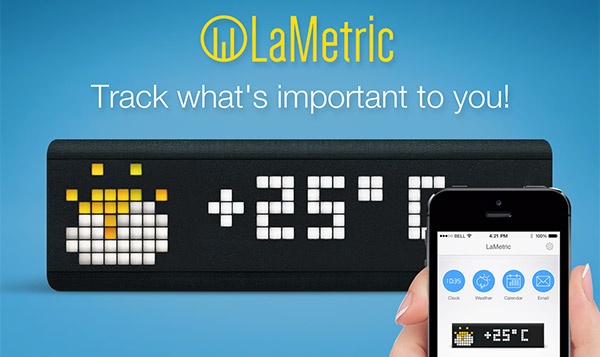 Underneath it all, this beautifully designed little clock is essentially a Wi-Fi enabled smart device which is configured via a companion iOS or Android app, just like many other connected devices available today.

Owners can choose the information that is displayed as a ticker on the display of the device using small apps that are installed on this clock. The connected smartphone app, available for iOS and Android, works in a similar fashion to how Apple’s Watch app works for Apple Watch by allowing apps to be installed via the iPhone or Android device, and therefore bringing additional power and capabilities to the smart clock.

By default, it comes pre-installed with apps like Clock, Weather, Radio, Stopwatch, and Timer, which of course makes it possible for the clock to display information over Wi-Fi from all of those apps. 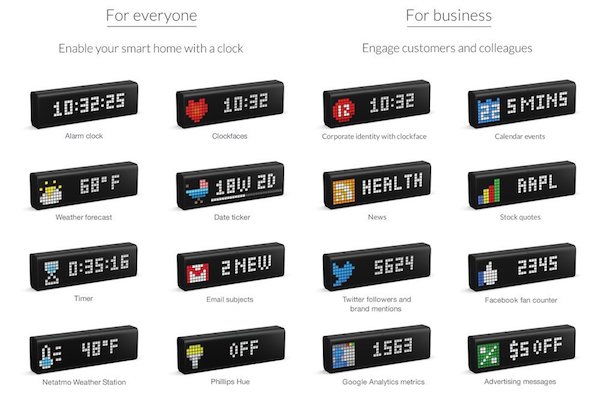 There’s then a mini app store of sorts that you can browse on the companion iOS or Android app to install many other apps such as Facebook, Twitter, YouTube to show glanceable info such as number of likes or number of your followers and subscribers. 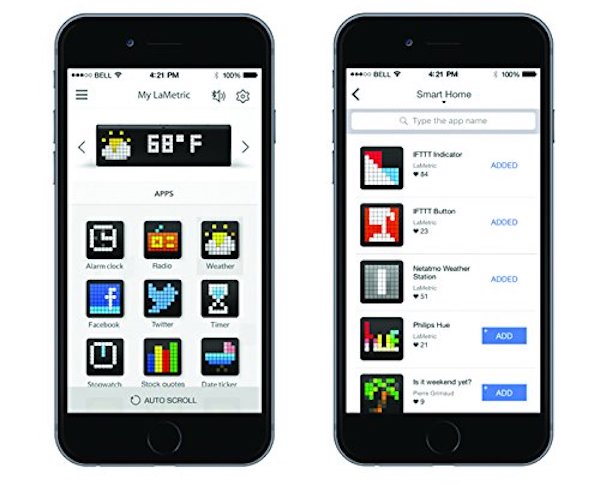 It also integrates with IFTTT service, bringing many other possibilities to the clock such as displaying news tickers from an RSS feed of choice, alert when someone leaves or arrives home, alerts for new emails received, and so much more.

And that’s not it, if you have Amazon Echo, you can even use Alexa to control what displays on the clock!

Besides all this, LaMetric Time also offers functionality like Internet radio, operating as a wireless speaker for music to be streamed through, and even an alarm clock which can be configured to rise in the morning with selected music.

LaMetric Time is based around the idea of glanceable information on the display, meaning that you can instantly get the time, news information, financial information, sports updates, and so much more directly on the display with absolutely no fuss whatsoever.

For those interested, the contraption can be ordered right now for $199.