The iPad 2, which was released earlier this year, is, from what I can tell, one of the slowest iOS devices to get a jailbreak. So far, it has only been jailbroken on iOS 4.3.3 and there has been no news of an iOS 5 jailbreak… until today, that is. An iPhone Dev-Team member has confirmed that the iPad 2 has been jailbroken on iOS 5 and we’ve got the details after the jump!

The news comes directly from MuscleNerd – famous iPhone hacker and member of the iPhone Dev-Team – in the form of a tweet in which he shares a video of an iPad 2 jailbroken on iOS 5.

Here’s a short video of current JB working on iPad2: youtu.be/oJVGl1eRW2A (Just like iPhone4S, lots of hurdles remain, no ETAs)

(For completeness (& post-verification this is real), here’s the iPad2 iOS5 ioreg dump musclenerd.com/ioreg_ipad2.txt .. 4S is earlier in timeline) 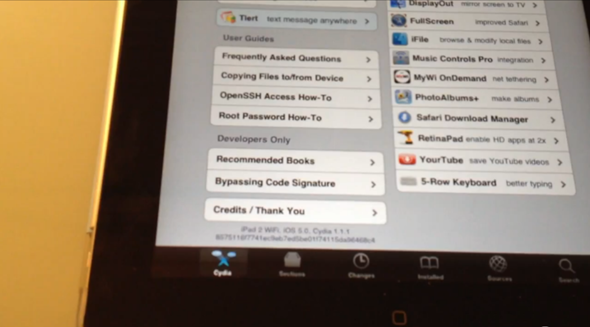 For the sake of “completeness” and “post-verification”, MuscleNerd has included iPad 2 on iOS 5’s ioreg dump which you can find here. I personally don’t understand one word of the .txt file, but if you know your stuff, you can find proof of MuscleNerd’s “iOS 5 iPad 2 jailbroken” claims inside it.

It is not clear what exploit is being used to jailbreak the iPad 2, but there is a possibility that it might be like one of those five userland exploits which were announced at MyGreatFest 2011.

As we mentioned in the very beginning of this post, the iPad 2 can only be jailbroken on iOS 4.3.3. If you haven’t upgraded to iOS 5, you can follow our guide on how to jailbreak iPad 2 on iOS 4.3.3.

No Estimated Time of Arrival (ETA) has been given by MuscleNerd, so please be patient and try not to bug the Dev Team about it. The jailbreak will come when it is ready!

We will, of course, be bringing you the latest and greatest from the iPad 2, iPhone 4S, and iOS 5 jailbreaking scene, so stay tuned!