Video Camera in your iPod Touch? 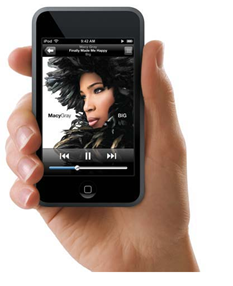 According to sources, Apple has ordered a large number of camera modules. The leaked images of the cases for the new line of iPods further signifies that the new iPods may indeed be getting the camera!

There are three things that must be highlighted here:

First: Huge amount of camera modules have been ordered by Apple! Huge signifies that the plan is also BIG.. so BIG that one of the sources said “Everything but the Shuffle may have a camera in it soon”.

Second: The type of the camera module ordered is almost same as the one already included in the iPhone.

Adding camera to the popular iPod Touch line seems like a logical step for Apple, because iPod Touch and iPhone both runs on exactly the same operating system underneath. Thus, this further makes our expectations higher.

Third: The cameras are cheap (less than $10 range) which means that it wont increase the price of iPod by much.

As I firmly believe “Cheaper is better, better is cheaper” 😛

However, there is almost no chance for the newer models of Nano and Classic iPods getting the video feature. The lower end iPods may however have the camera added for pictures. Despite the fact that Apple didn’t turn the video feature on in the iPhone 3G, lots of people use it via jailbroken apps like Cycorder, Qik, Ustream and others. They could be planning the same thing for the new models of Nano as well.

starts at $229. That’s almost the same price as the high end Flip Mino HD which is capable of recording very highly detailed videos. Undoubtedly, the Flip will take better videos. However if you turn the picture around, it lacks a number of things that iPod Touch has! It doesn’t have on-device editing and uploading to YouTube. Most importantly,there is no support to Internet browsing, email and access to a huge repository of games and other apps that are certainly available if using the iPod Touch. Not to forget that iPod’s primary use and purpose is music which certainly makes it a much better option than the Flip Mino HD.

Unfortunately, we don’t have enough authentic information to speculate more. But I wonder… with this and a lot of other advantages plus profits in mind…

Why WOULDN’T Apple add a camera module to the iPod Touch?