iPhone Helps Save Life Of A U.S. Solider In Afghanistan [VIDEO]

Most iPhone users would consider their device to be something of a lifesaver, in that it keeps them connected to the world and those around them no matter where they may be. But in the case of Utah-based U.S. solider Shaun Frank, the device literally saved his life – bearing the full impact of shrapnel from an explosion that may otherwise have proven fatal. In the end, the man escaped with only minor wounds, and has since personally sent his thanks to the Cupertino company.

The build quality of Apple products is such that fans of premium design and materials seem drawn to it, but while the device is generally robust enough to deal with the everyday bumps and scrapes, front line field protection is not exactly in its repertoire. 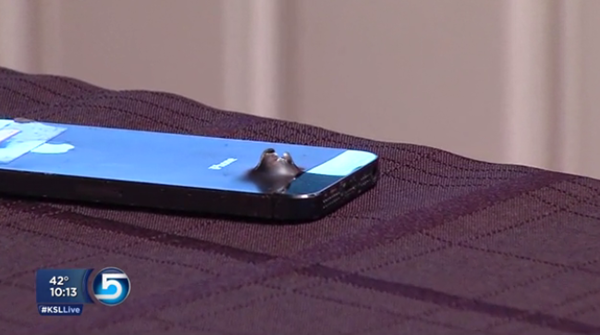 Still, when you’re a solider fighting conflict in Afghanistan, sometimes your smartphone needs to step up and be counted, and as medics noted to the man after his ordeal, the iPhone 5 "probably saved his life."

Getting a replacement device took, incidentally, more time and effort than his actual recovery. Initially, Apple refused to replace the handset due to the fact that Frank wished to keep hold of the damaged device that he credits with saving his life. They said that he could either keep what he had, or trade the damaged model for a shiny new one, but couldn’t have it both ways.

However, following the initial resistance, Apple eventually decided that Frank could keep hold of his memento and get a new, working device, and having lived to tell this rather miraculous tale, will probably remain a staunch iPhone user for the rest of his days.

A news video clip, which shows the extent of the damage caused by the shrapnel, just goes to show how lucky Mr. Frank is to be alive right now. Sure, the device suffered a devastating blow, but one suspects that if it had hit skin and bones rather than anodized aluminum, the outcome would have been far, far worse. Frank is really, really lucky to say the least.

Check out the video below, which also shows a brief interview with the victim, and be sure to leave your thoughts and comments via the usual mediums.