iPhone 5 Could Have A Serious Hardware Based Touchscreen Problem [VIDEO]

The iPhone 5 has been out in the wild for approximately seven weeks now, and considering Apple is still having difficulty replenishing stock levels, we can safely assume that it can be classed as yet another commercial success for the company. The fact that units are flying off the shelves doesn’t mean that the device is without its problems, a few of which have already come under intense scrutiny. One of them was a software glitch that affected the keyboard and folders in certain circumstances, but it looks like Apple could have some further display issues on their hands that fall under a hardware remit.

The issue has been brought to the public attention by a public tweet posted from the official Twitter account of CMA Megacorp, who exist as game developers for the iOS platform. It seems that during their daily development and testing work, they have come across some issues with the screen on the iPhone that prevents consistent when rapid diagonal scrolling takes place. Consistent diagonal and rapid scrolling might initially seem like something that doesn’t happen to often when using an iPhone but with apps and games like Fruit Ninja, you come across those swipes aplenty. 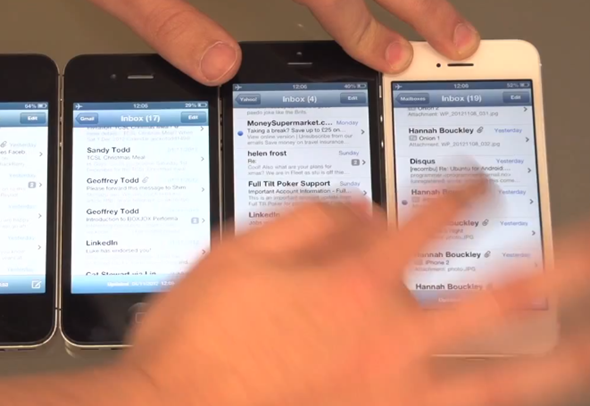 A subsequent video created on the back of the tweet has also appeared that seems to corroborate the claims of the game developers. The video shows two iPhone 4S models laid side-by-side with two iPhone 5 handsets. One of the iPhone 4S’ is running iOS 6 and the other has iOS 6.0.1 installed on it. The two iPhone 5s mimic the software installation setup. Rapid scrolling works perfectly on both the iPhone 4S’ handsets, with the hardware display and software able to keep up with the user input. However, on the iPhone 5 models, it is clearly evident that the same scrolling motion causes issues, with the display missing the input, or in some cases, not recognizing the input at all.

When gently flicking through your favorite news app, or scrolling through a Twitter feed, the issue will more than likely be invisible. However, it can prove to be a serious concern for game or app developers that produce something that actually requires fast diagonal scrolling. I have personally tested an iPhone 5 alongside an iPod touch third-generation, an iPhone 4 and an iPhone 4S and can confirm that the problem does occur on the latest iPhone model. Considering the test has been conducted with the same software on the iPhone 4S, it looks like it could definitely be a hardware related problem.