Where the inevitable iPad Pro has been discussed a number of times in the past, a new report is hinting at Apple’s apparent attempt to bring some fresh new round of features to the existing iPad lineup, such as side-by-side app viewing, and support for multiple users.

The iPad debuted in 2010, and for the first time in five years, Apple’s tablet has witnessed a decline in sales which has now turned into an obvious concern. The company is now looking to add some magic into the existing iPad lineup to reinvigorate its offering and continue retaining Apple tablet loyalists in the future as well. As reported by 9to5Mac, Apple’s focusing on two software elements, meanwhile it’s working actively in churning out the 12-inch ‘iPad Pro’, codenamed J98 and J99.

Apparently, Apple at this years’ WWDC will be launching the new side-by-side apps – multitasking – feature with iOS 9 on existing iPad models, with support to split the screen in 1/2, 1/3, and 2/3 views depending on the apps of course. The report further comments on the specifics talking about how this new feature can be used to view two different apps side-by-side or even multiple views of the same app or document, which should give productivity on an iPad some serious boost. Though the sources do point out that since Apple pulled this feature from iOS 8 as it was deemed not polished enough for public consumption, it could be pulled yet again before iOS 9’s launch as it still needs a lot of work.

This particular feature, alongside support for multiple users on one tablet, has been suggested to be developed originally with the larger 12-inch iPad in mind. While the report suggests that it’s confirmed that Apple is internally testing these larger iPads, it could also spell delay for the two new features as well as the Mac maker might want to release these features with the launch of the iPad Pro. 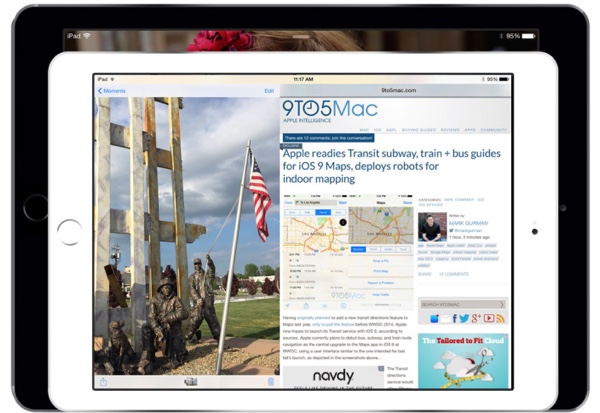 When exactly should we be expecting the iPad Pro? We don’t concretely know, with sources suggesting that the machine is still waiting on new hardware components to be readily available, while the software is still being worked on.