With the smoke finally starting to clear after Apple’s Worldwide Developers Conference, developers are starting to get to grips with all the new APIs that have been announced as part of iOS 9. Set to be released later this year, iOS 9 will bring a host of new capabilities to iPhones and iPads, with one API about to make it easier for developers to add screen recording features to their apps.

Appropriately named ReplayKit, this particular API will make it possible for gamers to record the action as it happens and then play it back at a later date. This recorded video could then be uploaded to video sites such as YouTube, ushering in a new wave of games that make the sharing of gaming clips one of their headline features.

The uses for such a feature are obvious, and gamers can already record their exploits and then share them on home consoles such as the PS4 and Xbox One, both of which have proven popular. If Apple does intend to help iOS keep pace with a gaming industry that seems to be edging towards sharing game experiences with friends, an API such as ReplayKit makes perfect sense. 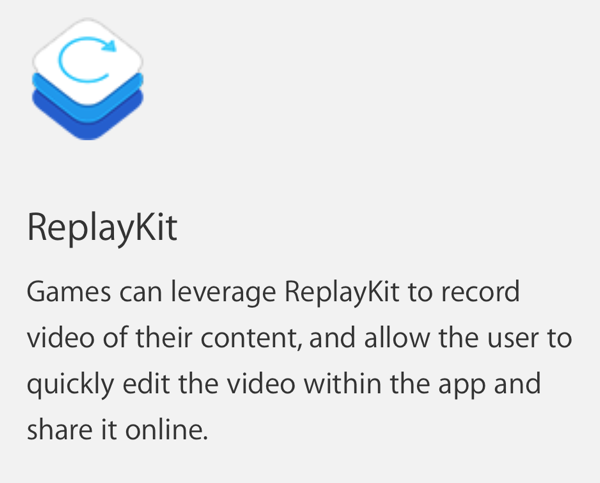 In iOS 8 and Yosemite, Apple introduced a way to record the iPhone or iPad’s screen but the whole process is cumbersome and it involves connecting iOS device to Mac to make it all happen. If you want to give it a shot right now, simply follow our guide here: How To Record iPhone, iPad Screen Video Using OS X Yosemite.

Apple showed off iOS 9 to developers during its WWDC 2015 opening keynote this past Monday and has already seeded the first beta. A public beta is set to go live next month, with a final shipping product to be ready for when the next iPhones come to market around September time. ReplayKit is not the only new feature users and developers can look forward to when it comes to iOS 9, with increased iPad multitasking and a whole new Siri top of the list of additions.

More details on the public beta program can be found here: Sign Up For iOS 9 Public Beta Program Right Now, Here’s How.