The iOS updates have been particularly frequent over the past few months, and whilst it’s long since been known that iOS 8.2 will arrive sometime soon with Apple Watch support and several other alterations, there has also remained a feeling that we’d see another minor update prior to its arrival. Now, a new report has all-but confirmed this to be the case, and whilst we’re not expecting any drastic changes, Apple will probably throw in a few bug fixes and general performance enhancements.

There’s been a sharp spike in the count of devices browsing the Web using iOS 8.1.3, and when an unreleased software version begins showing up on traffic data in considerable numbers, including RP, it traditionally implies that a release is imminent. 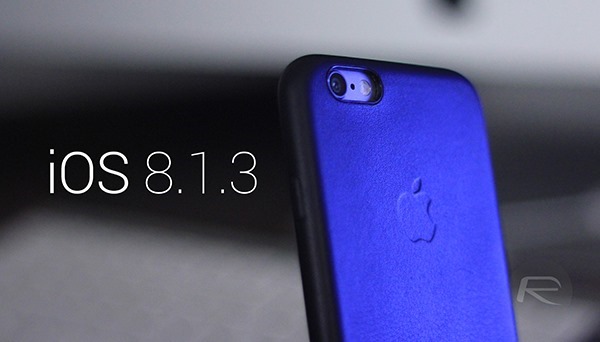 BGR has the scoop on this one, suggesting that iOS 8.1.3 will be rolling out at some point during the next week, and given that Monday is often the chosen day for iOS software, we could now be just a couple of days from lift off. But the report suggests that the update could drop on either Tuesday or Wednesday.

Traces of iOS 8.1.3 have been floating around for over a month now, and we first got a glimpse of it in activity logs in December of last year, suggesting that Apple would be swift on its release. But going by how time has flown by with no sign of the update hitting our devices just yet, it’s fairly obvious that the Cupertino giant wants to publish a well-crafted article rather than just a quick fix.

Although minor bug-fix updates shouldn’t be of too much concern to the iOS faithful, the jailbreak community will no doubt retain a watchful eye on proceedings. With Pangu and later TaiG having brought untethered jailbreaks to every version of iOS 8 so far, it will be interesting to see whether Apple finally got around to patch the exploits used by TaiG.

iOS 8.2, meanwhile, will see the launch of the Apple WatchKit SDK, which is good news for those looking to develop apps and experiences for the Cupertino’s first wearable. We don’t know precisely when the hardware will rear its head, but having been impressed by the previews seen back in September, it’ll be interesting to gauge the market’s response.

Whatever the case may be, we’ll have details, download links, and potential implications on the jailbreak reported on as and when they arrive for iOS 8.1.3 and beyond, so stay tuned to our coverage!