Just a day after making iOS 10.3 available to the public, Apple surprised everyone by launching the first beta release of iOS 10.3.2 to developers.

The update skips iOS 10.3.1 entirely, possibly due to the version number being reserved in case of any major bugs needing to be fixed after iOS 10.3’s release, and kicks off a whole new beta cycle so soon after the previous one ended. This being iOS though, questions are already being asked as to whether this new version brings with it any increases in performance, especially on older and less powerful hardware. 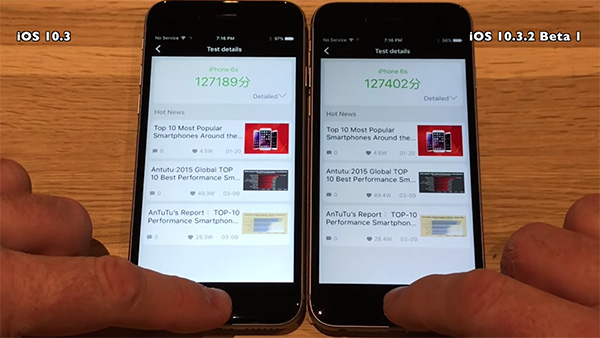 Keen to answer that question, the folks over at the iAppleBytes YouTube channel have already put the new update through its paces using an iPhone 5s, an iPhone 6, and an iPhone 6s. By running a speedtest on each device running iOS 10.3 as a baseline and then iOS 10.3.2 beta 1 as well, the resulting video gives us a glimpse at what we can expect when the beta process ends and iOS 10.3.2 is released to the public.

We are not going to spoil the fun and instead will point you over to the three different YouTube videos that show the testing carried out by iAppleBytes, as well as, of course, the results.

Apple released iOS 10.3 a few days ago, and perhaps its biggest change was one most users will never know about. By moving all iOS devices over to the new APFS file system, Apple is getting things geared up for moves it may make in the future. HFS+, the previous file system used by Apple devices, has been long overdue an overhaul, and with APFS now let loose on iOS, it is only a matter of time before it comes out of beta on the Mac and becomes the new file system we all use day to day.

If its seemingly flawless rollout on iOS is anything to go by, we have nothing to fear when macOS goes through the switch.