When we talk about jailbreaking an iOS device, the large majority of people conjure up images of running software like Redsn0w or Absinthe to liberate an iPhone, iPod touch or an iPad. Granted, those devices are the most popular and more of those particular models are in circulation but it’s important to not exclude the fantastic Apple TV product when discussing the art of jailbreaking. At the time of writing we currently have the second and third-generation Apple TV units in circulation, with a jailbreak only being available on the former of those two models at present.

Finding and producing a jailbreak for the Apple TV is an extremely hard task. Although the unit runs its own modified version of iOS it unfortunately isn’t susceptible to the same exploits and vulnerabilities that are used to provide liberation on a mass-scale to other, more popular Apple mobile products. It is also worth noting that the same resources and man-power that are expended on the iPhone and iPad aren’t really dedicated to the Apple TV, with Kevin Bradley (nitoTV) being one of the few tireless and hard working ATV experts who continually pumps his time into this hobby.

For those who can’t speak highly enough of a jailbroken Apple TV then the hard work of nitoTV and his partners over at JailbreakAppleTV.com have brought some great news to the jailbreak community. The development and release of the nito installer for Apple TV 2 means that less technical jailbreakers can now install nitoTV and XBMC without having any involved technical knowledge. Previously, installing these must-have add ons required the user to use SSH or Terminal commands to get access to the ATV2 unit and install third party software. The nito Installer totally removes this sometimes confusing step by offering a simple and professional looking graphical front end that works with simple clicks. 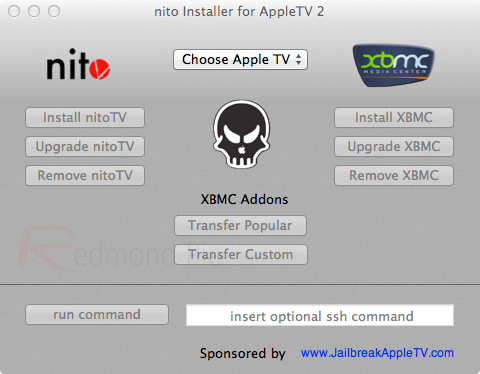 The installer is currently only available for use on the second-generation Apple TV as there is no jailbreak available at the present time for the ATV3, but it is feasible to expect availability on that unit should a jailbreak ever become available. Although the Apple TV jailbreak scene has been a little quiet of late, the release of this installer software clearly shows that although we aren’t singing and shouting from the rooftops, the hard work is still bubbling away in the background to bring a jailbreak as well as great software to the community. 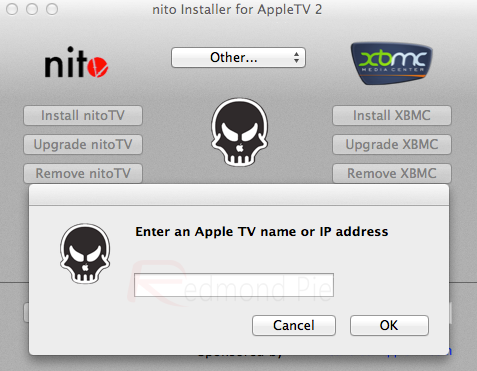 Nito installer for Apple TV 2 can be downloaded from the source site here.