Epic’s blockbuster slasher Infinity Blade has received a one-on-one multiplayer option as well as new single player loot, according to the company’s blog. 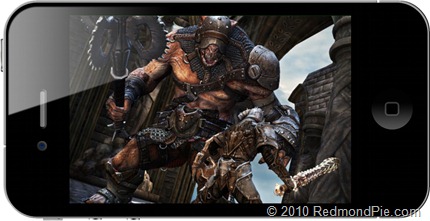 Along with a one-on-one arena mode the update also brings new Facebook integration as well as new swords, rings and other collectables. Epic’s blog post of a few days ago announced the update’s multiplayer component to its patiently-waiting fan base.

The wait is almost over! For those of you who’ve been hoping to battle one on one in the world of Infinity Blade, your time has come. Epic Games‘ ChAIR Entertainment’s free update, entitled Infinity Blade: Arena, will go live this Thursday. The new update is full of all sorts of new, exciting additions, including a Survivor mode where you battle a legion of Titans to see how long you can last. There are also updates to the single player mode, as well.

Infinity Blade fans have been calling out for a multiplayer option since the game’s launch and now Epic has finally delivered. The company will mow be hoping for a second wave of publicity and buyers to come along with it.