The Cydia platform is an extremely popular playground for those jailbroken iOS device owners who wish to download tweaks and extensions to modify their installed operating system. But while Cydia does contain a massive number of tweaks, it is also packed to the rafters with themes which digital artists and designers have created to amend the look of iOS.

The recently launched IconControl package is a piece of software that exists to benefit both sets of users, those who wish to amend iOS and those who like to theme the OS’s aesthetics through the user of WinterBoard theming packages. The core functionality of the IconControl package is to allow users to amend and alter app icons in a variety of ways to suit the user’s tastes, as well as fit in with the look and feel of any installed theme.

It seems that this tweak was developed in addition to the developers’ own themes, as he states that it has been developed to be used with his own artistic creations, although he does concede that it works just as well with all other themes which people may be running. One of the good things about the package is the fact that it features a large array of options, so should certainly provide a decent amount of bang for your buck. When installed, IconControl doesn’t append the home screen with any icons but does come with its own set of configurable options through the Settings app, which is where the magic is invoked. 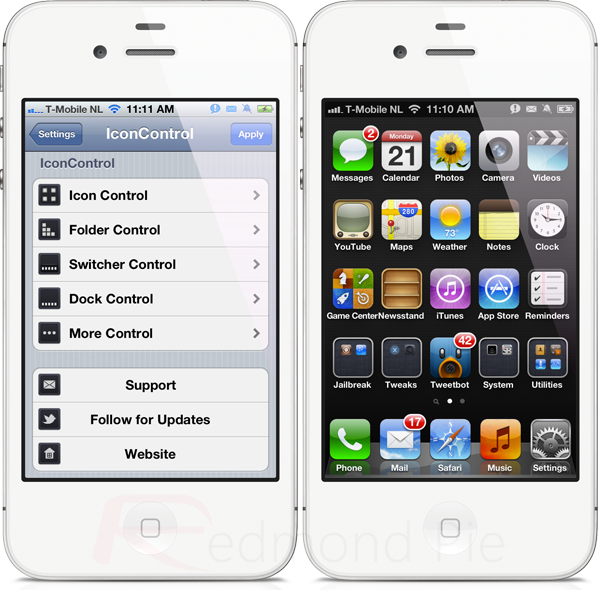 The settings panel is the hub for all tweak alterations and allows users to change the folder icon layout, change the standard layout of icons, hide the Newsstand icon, hide all app icon labels, remove the shadow from app icons, remove the ability to uninstall apps, provide a 2×2 folder option as well as a five icon switcher. Plenty of features and functionality has been packed into IconControl and should provide icon manipulation options to suit all tastes.

IconControl is available as a free of charge download from the MacCiti repository for those who have previously purchased the developer’s BladeHaz3 WinterBoard theme. For all others the tweak will set you back $1.79. And oh, it works on iOS 5.1.1 as well, which is the latest version of iOS.