Conan O’Brien thinks that he might have the solution for those that fancy themselves an Apple Watch, but just can’t justify the entry price, especially given the first generation hardware involved.

Nobody ever called the Apple Watch cheap, even amongst those of us that are looking forward to its release on April 24th. The entry price of $349 for the 38mm version may be a bit on the steep side for some, but there are always options for those willing to think outside the box, as Conan O’Brien is quick to point out. 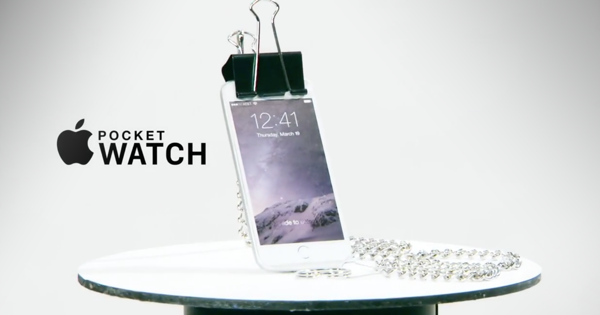 Dubbed the Pocketwatch, and showcased in a video that really needs to be seen to be believed, the Pocketwatch is essentially an iPhone with a bulldog clip and a chain attached to it. It’s not small, and it’s not particularly light when compared to the Apple Watch – but it sure does have a bigger, higher resolution screen!

Oh, and you already have one in your pocket. What a delightful coincidence!

Of course, picking up an iPhone from scratch isn’t going to be cheaper than an Apple Watch depending on your current carrier situation, but considering you’ll need an iPhone to use the watch in the first place is the classic chicken and egg situation in all its glory.

If the idea of an iPhone on a chain doesn’t appeal, then the Apple Watch can be pre-ordered come April 10th in launch countries like the UK and US, while they will be available to buy in-store on April 24th.

Only a month or so to wait! We just wish we had an Apple Watch so we could keep checking how long we have to wait before it’s available.