Humor: French Ad Shows Paper Does Have A Future, Even Versus A Tablet [VIDEO]

In this Digital Age, we’re certainly using paper a great deal less than we used to. Whether reading, writing or corresponding, the ease in which one can send an e-mail, purchase and read a new book or create a document is something often taken for granted, but as one French company has correctly pointed out, there are still plenty of uses for paper in our day-to-day lives. Humorously portrayed in an advertisement, a husband constantly taunts his bemused partner by enjoying a more efficient, digital life than his altogether more traditional other half; but soon comes a cropper in a certain situation where a tablet simply cannot be of any use.

The man utters his wife’s name in a smug, self-satisfied manner after watching her struggle to perform tasks such as reading and note-taking in the traditional, paper-and-pen manner. She ultimately gets the last laugh when, in finding himself on the toilet, he shouts her name, only to look on aghast as the tablet is slid under the door, with a picture of toilet paper! 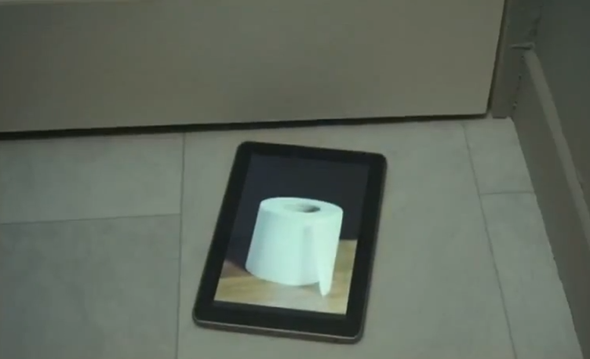 Perhaps next time, the man will think twice before taunting his wife about her apparent refusal to bow to the whims of digitalization? Judging by how much he enjoyed the one-up-manship throughout, probably not, but after his rather unfortunate episode at the end there, maybe he’ll be extracting some digested humble pie on his next trip to the bathroom!

The ad was run by French toilet paper company Le Trefle, and is, in my opinion, a stroke of advertising genius. Although the tablet in question has been identified erroneously as an iPad by others reporting on the ad, it’s certainly not the Apple slate; but regardless, the well-made point remains the same. Check out the video below in its full glory for some epic laughs:

Those using a computer, smartphone and tablet combination for the day-to-day running of their lives have probably forgotten how even to hold a pen, but as Le Trefle proves, it doesn’t actually matter how much technology evolves. The fact is, we’re always going to need paper in one form of another, and when we’re talking about this kind of paper, there will simply always be a market.

Loved the video? Why not share your thoughts on it via the usual mediums below.

(via iClarified) Thanks, Marco for the hat tip!