If there’s one thing that iOS hasn’t changed at all since its very inception, starting with version 1.0 and now to 6.1, it’s the look and feel of the interface. Granted, there have been various feature enhancements, and with iOS 6, there were some visual uplifts as well, such as the color-sensitive status bar and others, the overall feel of the operating system has remained the same. To be honest, this wasn’t a feel that was very catchy, either, so it’s not like Apple deserves any praise here either.

Android, on the other hand, has been a very different beast altogether. Not only have there been launchers for a long time that can totally change the appearance of your device, but also, it had also been possible to go for themes and aesthetic customizations through the use of widgets, live wallpapers and whatnot since a long time back. Over the years, Google’s smartphone and tablet operating system has matured even further, with no small credit to the open source developer community. One thing that the user base has always had a beef with, however, was the OEMs’ decision to impose their custom skins over the vanilla Android experience, which essentially differentiated, say, Samsung’s products (TouchWiz) from those of HTC (Sense). 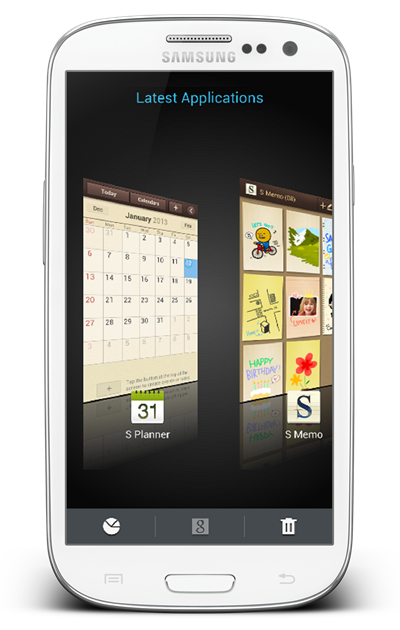 Sense has always been, in my opinion, one of the best custom Android skins out there, and it’s hard to argue with that once you’ve used a Sense-based interface for any amount of time. It’s absolutely beautiful, with elegant icons, highly functional widgets, and scenes that are sufficient to reflect your mood and operating environment for a lot of scenarios. The problem, however, is that Sense is not open source, and while there have been countless attempts to port Sense elements to other ROMs, it’s mostly been without much luck. Thankfully, if you own a Galaxy S III i9300, you can share some of the experience in the form of HTC Sense’s Task Manager & App Switcher that has been ported to the said device, provided you’re running stock firmware XELLA, or a custom ROM based on the said firmware. 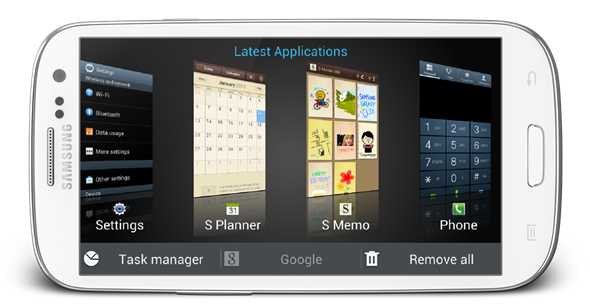 In case you’re unaware, Sense’s task manager follows a card-based UI for application switching, showing full-screen previews of the recent/running apps. It’s absolutely gorgeous to look at, and quite functional, too, so you’re getting the best of both worlds. The good thing about this mod for Galaxy S III is the fact that it supports both portrait and landscape orientations, and hence, has you covered for all scenarios. The task switcher also allows you to kill all apps in one go, and would also provide quick access to Google Search.

The only limitation with this Sense Task Manager port is that it works with GT-i9300 only, and that, too, on either the XELLA stock firmware, or a custom derivative of the same. You can grab it at the source link below.