HTC One X+ Gets Photographed In The Wild

HTC, despite producing solid smartphones, is finding itself swamped in a sea of solid Samsung devices at this point in time, with its flagship, quad-core One X having sold millions less than the Korean company’s own quad-core powerhouse, the S III.

The Windows Phone 8 handsets unveiled by HTC recently did little to capture the imagination since, although they certainly look the part and boast the specs, both bear striking similarities to the Lumia devices of Nokia. In fact, the Finnish telecommunications company even came out and called HTC’s Windows Phone 8 devices "tactical re-branding," and the last thing the Taiwanese outfit needs, on top of struggling sales, is negative press.

The T-Mobile-branded HTC One X+ is, although some may not recognize this, a pretty important device in the grand scheme of HTC. I’m not saying it’ll be make-or-break (HTC isn’t quite in BlackBerry territory, just yet), but it’s been a while since HTC made consumers and bloggers stand up and take notice. The original One X was supposed to do that, but despite boasting the beefy its performance left a lot to be desired. No expandable memory, paired with a decidedly slow UI, it was quickly exposed for its flaws, and has been sitting on the shelf whilst the S III and iPhone 5 have taken center stage. 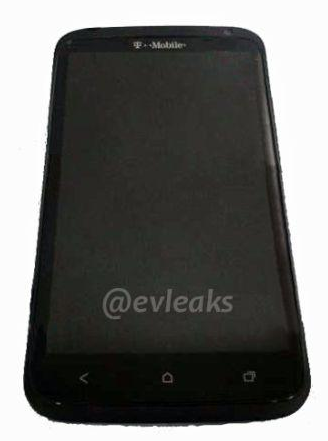 Please note, it’s only gossip at the moment, and there’s no way the image can be verified. Still it looks as though the One X+ will be a strong (if somewhat unspectacular) device, and we sincerely hope HTC has learned from its mistakes with the One X.

T-Mobile, to which this device will be exclusive, is making quite a dogged effort to entice iPhone owners, despite not actually carrying the device, and with that in mind, will T-Mobile customers lean toward the next offering from HTC?