How To Watch The 2013 U.S. Presidential Inauguration Live On iPhone, iPad And Android Devices

If you take the slightest interest in politics or current affairs, you are likely aware that President Obama is being inaugurated for his second term today, in a ceremony that will drag the attention of large crowds in Washington, DC. But if you live in any other part of America, or the world, and are not able to join Obama in person, there is a new app for iOS and Android, made by the White House itself, which makes it easy for you to celebrate this occasion.

This app is more than just for live streaming the President’s inauguration, it is packed with resources, such as recent photos and short clips of the President, as well as a connection to the White House blog, featuring the official views from the Democratic President on a range of current issues, as well as additional details on today’s event.

There is a lot more than meets the eye, however. This app is meant to promote local events in areas outside of Washington, DC, so don’t worry, if you don’t live in the Capital, this app is still very useful, if not more. The Presidential Inauguration app detects your own location and automatically lists out all the events available around you: these can range from concerts to dinners. With social networking in mind, this app also allows users to post photos or videos in the form of status updates to both Twitter and Facebook, making it possible for many small events across the country to be promoted on a national scale. 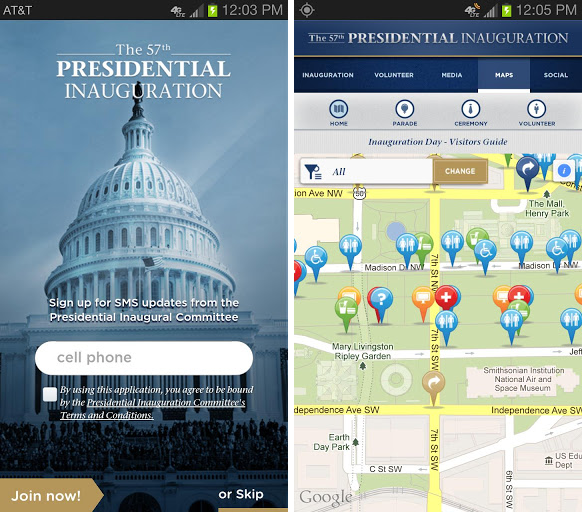 Leveraging the internet and social media was always a landmark aspect of President Obama’s administration. After running a campaign that focused largely on the use of Twitter, Facebook, YouTube and other social networking sites, the work has continued throughout the last 4 years of the President’s administration, which often relied on social media tools to gather support for some of its landmark policies. 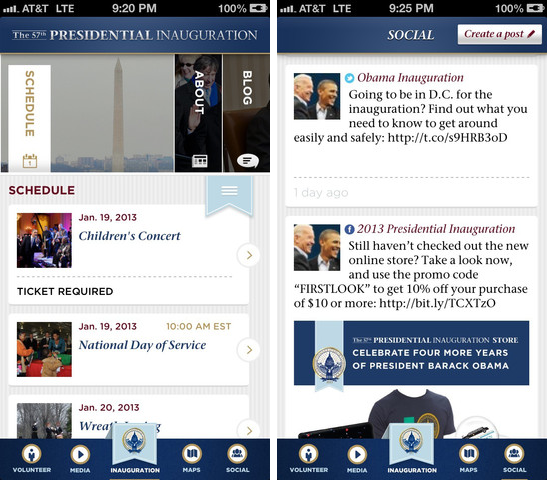 Barack Obama’s inauguration will start at 11 AM ET, yet celebrations are expected to be held all around the country throughout the whole day.

(Source: Inaugural 2013 for iOS and Android on App Store and Play Store)