How To Set Volume Buttons On iPhone To Control Screen Brightness

One of the great design decisions which Apple took in respect to the iPhone, iPod touch and iPad is the almost-flawless form factor and external body of the device that has only been disrupted with the addition of hardware buttons where absolutely necessary. There is a good reason why the original iPhone only had two volume buttons, a silent switch, a home button and a sleep button, and that design trend continues to this very day. However, some users like to have a way to use the volume buttons on the device to invoke different actions, which is why the BrightVol Cydia tweak may be of interest to some users.

It is extremely reasonable to expect buttons on the iPhone and iPad to be capable of performing different actions. After all, Apple has programmed the home button to let us drop out of any app and go straight to the home screen as well as moving directly to Spotlight search and invoking Siri. BrightVol is an extremely simple tweak that gives the hardware volume buttons a secondary purpose and allows users to directly control the brightness of the device’s display without having to go into the native Settings app or the multitasking switcher to adjust the brightness using the slider, if you’re using an iPad.

Rather than just bundling the new functionality in as a replacement for the stock behavior, the developer has come up with the best way to implement this new feature, and has chosen an Activator method that lets users switch between the volume and brightness control functionality on the fly. Pressing both of the volume buttons together will change the action to control the brightness of the display. Pressing both buttons together again will then switch the behavior back to the standard volume control. Alternatively, users can wait 30 seconds and the device will switch back to default behavior automatically. 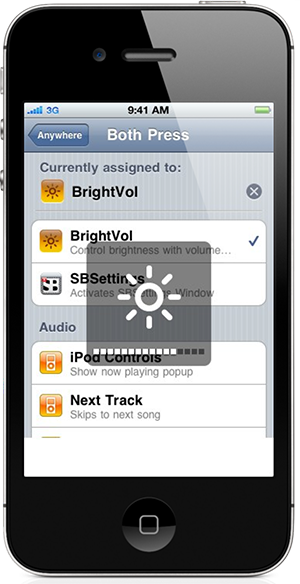 It isn’t staggeringly advanced functionality, and it isn’t going to dramatically change the way how the device works, but it is nice to see a developer tackle a real issue and offer support that users would want and still thinking about the most efficient and user-friendly way to go about it.

BrightVol is available as a free of charge download from the BigBoss repository with no specific iOS version requirements being given.