It may just be something that is unique to me, but I always seem to get a little excited about mobile apps and Cydia-based tweaks that offer some kind of audible feedback to the user. I love Siri and App Store apps like Evi because they talk back to me, and I love tweaks like iCallAnnounce because they react to an event on the device and provide feedback to me through voice.

It was inevitable that I was going to love the LaunchSpeak tweak that landed in Cydia a few days back. The name of the package should really give away its functionality, but for those who might be struggling, LaunchSpeak basically allows users to specify a text string that is read out by the device whenever an app is launched from the home screen.

Cydia does contain other tweaks and packages which allow users to define certain tones, sounds and vibrations to be played when apps are invoked, or when certain events happen on the device, but a lot of them are extremely in-depth, have messy user-interfaces, cost money and are just overly complicated implementations of something that should be very simple. LaunchSpeak does away with all of the complications, and makes it as easy as specifying a string of text, respringing the device and launching apps as normal. 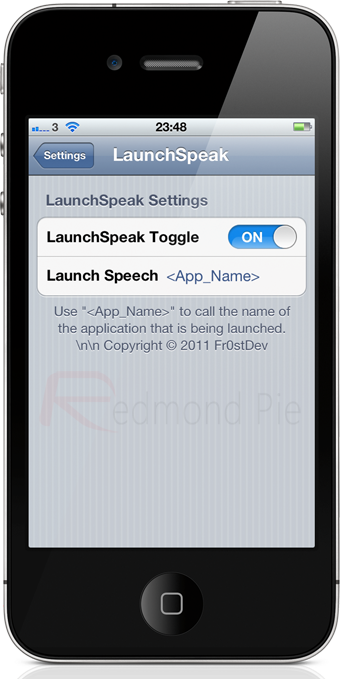 When installed, LaunchSpeak doesn’t come with its own home screen icons, but does come with a set of configurable preferences through the native Settings menu. The tweak’s configurable options don’t get any more simpler than this, containing only a switch to toggle LaunchSpeak on or off, and a text field that allows the string of text to be entered. Users can enter any sort of text that they want in the field and aren’t limited to just announcing the name of the app. Some example of the usage is as follows:

The package will be somewhat of a novelty to some people, meaning that it is unlikely to become one of those tweaks which stand the test of time. After all, considering most of us come in and out of apps pretty frequently, it does get a little annoying to have the device blurt out every time. However, I can imagine that something like this could be extremely useful to visually impaired users who may just want some kind of feedback or confirmation that they have launched the required application.

LaunchSpeak is available as a free of charge download from the ModMyi repository with no iOS version requirements being given.