How To Hide App Store Purchases In iOS 8

Apple may currently be working to bring forth iOS 8.1 later on this month, which will include some exciting new features like Apple Pay, but even at its current duration, iOS 8 offers plenty of changes and improvements for the iDevice community to familiarize themselves with. Along with some of the more blatant additions to iOS 8, such as third-party keyboards and Notification Center widgets, Apple has made a multitude of subtle, less obvious adjustments, and among them, a long-standing gripe regarding App Store purchases has now been addressed.

Whenever you make a purchase on your App Store account, it’s listed under the Purchased menu, which, in itself, is fine. But aside from the elongated process of firing up your computer and signing in through iTunes, there never used to be a convenient, native method of removing apps from this list; until now. 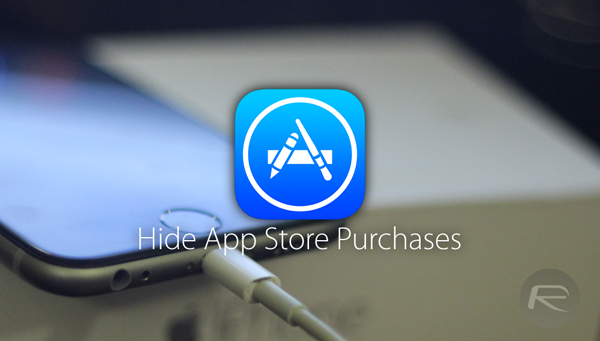 But why would anybody wish to delete apps from this list, I hear you ask. After all, nobody’s being forced to download them, and they’re not doing any harm. As true as this may be, the list of apps you actually want to use, when combined with those you’ve downloaded on a whim and quickly deleted, creates a large, disorganized mess, and so to make it nice and easy to carry out a bit of housekeeping every now and again, Apple has added a simple feature for deleting App Store purchases.

As well as finally offering what many users deem to be essential functionality, it’s also very easy to use. Once you’ve opened up the App Store app, simply tap on Updates and navigate through to Purchased, and any apps you wish to obscure can be hidden by a rightward swipe and hitting the HIDE button that subsequently appears. But keep one thing in mind; this only works when Family Sharing is enabled on the device, otherwise it won’t work. 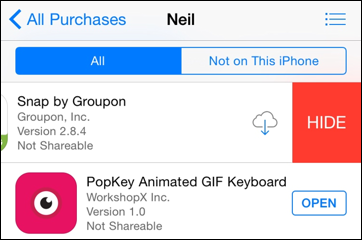 It should be noted that while these apps will no longer bother you, they’re not removed from your account completely, and so if you hide an app that you’ve bought but then change your mind and decide you want to begin using it, you won’t have to pay the fee again.

This feature may have solved an issue for App Store frequenters, although does not apply to the iTunes Store app, which will still require the intervention of the desktop iTunes app for the business of hiding purchases.