How To Fix iMessage Not Working In iOS 7

iMessage has been, on the whole, a great implementation to the iOS fold, but it hasn’t been without its issues. We’ve seen numerous cases of spam attacks as well as the all-too frequent downtime periods, and since the release of iOS 7, some users have been noticing that messages are not sending or being received properly at all times. With the exception of those aforementioned instances, iMessage is normally firing on all cylinders, and if you’d like the smooth, regular service resumed on your device, there are a couple of fixes available.

The first potential solution is, quite literally, the old faithful. Although turning the device off and then back on again may sound a bit of an obvious step, some users have found that it does the trick, and thereafter, the normal, functioning iMessage returns. Thus, it goes without saying that before proceeding with the main solution, which involves resetting network settings, you should probably try a simple power down to see if iMessage can fix itself.

If that doesn’t work, check out the steps below:

Step 1: Deactivate iMessage. This can be achieved by heading over to the Settings app and navigating to Messages.

Step 2: Next, reset your device’s networking settings by browsing through Settings > General > Reset. Please note, this will reset your Wi-Fi hotspots, so you will have to go through the rather tedious process of re-entering your saved network keys.

Step 3: Finally, repeat Step 1 to re-activate iMessage and hopefully, with any luck, you shouldn’t have any more problems.

These kinds of issues are frequent in a new piece of software, and although it’s never ideal to be trawling the Internet for solutions and fixes, subsequent updates to iOS should restore the more stable general user experience we’ve come to expect over the last few years. 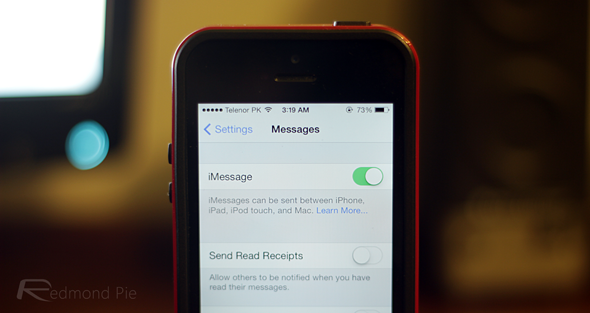 It is also being suggested by users that instead of reverting to standard SMS when iMessage isn’t working, the Messages app simply continues trying to send via iMessage, failing every time. Obviously, with quite a few people now complaining about these problems, we’d expect that Apple is on the case and working on a fix. Last week’s release of iOS 7.0.2, which brought a couple of security updates, seems to have only antagonized the issue according to some, so let’s hope the Cupertino company is quick with the remedy.

We’ll keep you posted on the next release of iOS 7, so stay tuned to our coverage here at Redmond Pie!