Jay Freeman, better known throughout the jailbreak community as Cydia creator Saurik, rarely dabbles in the business of building tweaks himself. The WinterBoard jailbreak app has been around almost as long as Cydia itself, and since its release, tweaks from the founding member of the jailbreak scene have been fewer and farther between. But earlier today, a new tweak by the name of Cyueue entered his repository, and simply put, allows for a more flexible experience when using the native Music app.

The iPhone, lest we forget, is a device which culminated from the idea of the iPod, and although it has many uses besides the playing of music, it’s still an essential feature of the all-round experience. 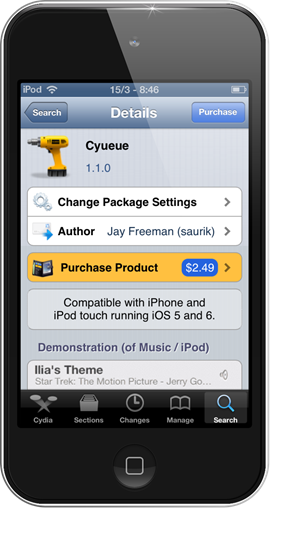 Over the years, the options for playlisting on the move have gotten decidedly better within iOS. In the early days, the very idea of making a playlist on the move was pretty far-fetched; but now, creating, editing, renaming and removing playlists within the Music app is a largely streamlined affair.

Seamless as it may be to tinker with playlists, it’s not without its shortcomings. If you’re browsing through and find an oldie-but-goodie, for example, you have to disrupt your entire playlist in order to enjoy it there and then, and there’s no way of queuing it up to listen next, or perhaps just later on in the day. In Cyueue, Saurik has created a novel way to deal with this particular issue, modifying the Music app and adding a custom, "Cyueue" playlist which is a great deal more customizable than ever before.

To get started with it, you simply press on a song, and a menu pops up, asking whether you wish to Play Now, Play Next, or Play Last. What’s more, as soon as your Cyueue queue is has finished playing, it automatically returns to the tunes you were playing before.

A great little tweak for all music fans, it costs $2.49 over at the Cydia store. It embeds straight into the Music app as if it was a native feature, and as you would expect from a tweak by someone with Saurik’s experience, it runs extremely smoothly indeed.