How To Delete Stock Apple Apps In iOS 10

Here’s how to delete stock Apple apps in iOS 10 and then reinstall again when needed on your iPhone, iPad or iPod touch device.

Hurrah for iOS 10 and its new found ability that allows users to remove stock Apple apps from the Home screen of the device. No longer shall angry iPhone and iPad owners have to go through the motions of creating a folder that’s solely dedicated to housing redundant and unused apps that many see as Apple’s bloatware. It’s quick, the process is very familiar, and it’s very, very easy to do.

iOS 10’s ability to delete stock apps isn’t exactly a surprise and has been available since the first beta build came out for developers and the public test alike, but now with iOS 10 available to everyone, this awesome feature is available to the masses.

Before we move on with this, it is important to explain that deleting any official app from iOS 10 doesn’t actually remove the app’s data, and as such re-downloading the app simply activates the app that had been made redundant temporarily on the iPhone or iPad. With that out of the way, here’s how you can easily and quickly delete stock Apple apps from your iPhone or iPad running iOS 10:

Step 1: First and foremost, similarly to how you would delete any app, tap and hold on the icon in question on the Home screen until such a time that the apps are put into edit mode, as indicated by that iconic wiggle.

Step 2: The app icon will be augmented with the familiar-looking “x” in the top-left hand corner. Tap that new “x” icon to begin the deletion process. 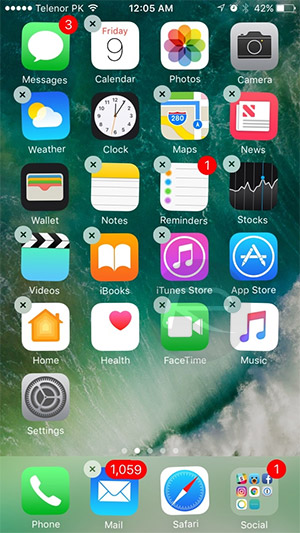 Step 3: When the system throws up a pop-up titled Remove “[App Name]”?, make sure that you confirm the deletion by tapping the Remove option in the alert. Of course, you can always lose your bottle and decide that you need to keep that revolutionary Tips app on your iPhone, and hit Cancel to back out. 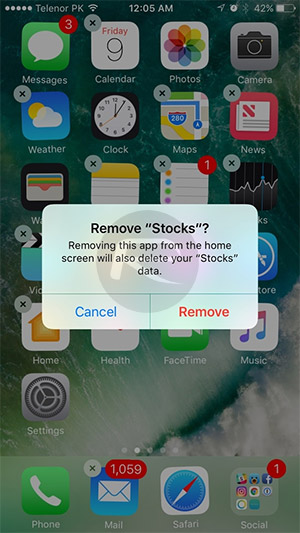 Step 4: Repeat the process for all of the stock Apple apps that you want to delete and that you would normally cast away and consign to an “Extras” or “Useless Apple Apps” folder never to be seen or used again.

Step 5: When the blitz is complete, and you’re feeling extra proud of yourself, hit the Home button to exit.

It’s important to note that not all stock Apple apps can be deleted though. Here are the stock apps that you can delete from iOS 10:

As also explained earlier, what’s actually very investing about this, and definitely worth pointing out, is that you aren’t actually deleting the apps from the device as such. Rather, you’re going through the process of deleting the physical and visual representation of that app on the Home screen of the device. The app and its core components still remains part of the iOS file system, and as such, can be instantly and efficiently re-downloaded from the App Store again at anytime. To do that:

Head over to the App Store, simply search for the stock app that you deleted earlier, and hit the familiar looking download button to install/activate the official app back onto your iOS device again.