While it’s true that Apple has worked to make inter-app sharing of data a more complete experience in iOS over the years, there’s little arguing that Google’s Android is the current leader when it comes to letting apps talk to each other. Apple’s walled garden makes sharing photos, snippets of text and other data much more complicated than it needs to be, no matter how much it has improved.

Of course, jailbreak developers tend to find ways around such problems, with Apple’s self-imposed limitations no-longer a consideration, and that’s certainly the case when it comes to sharing information between iOS apps. Activity Pro is one way of improving an app’s sharing options, and it’s all set for iOS 7 too.

Activity Pro is free and it’s available in Cydia for immediate download too. Once installed, you’ll notice that the usual iOS sharing pane has gained some more options, with some incredibly useful ones being added to the existing options that are part of the iOS 7 defaults. 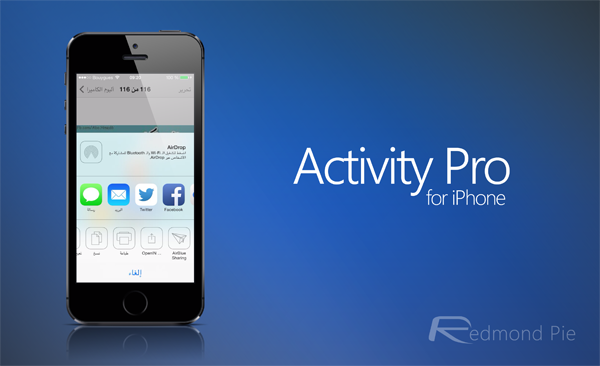 With Activity Pro installed, opening a photo and choosing to share it will now present two new options. The first will let you take that photo and share it directly to WhatsApp, the extremely popular instant messaging service. The other option will do the same kind of thing, but with the less popular LINE. Great if you want to share that picture of a cat doing that thing you think is so funny.

Photos aren’t the only things to get some new sharing abilities though. The stock Notes app will now also support sharing of text to both LINE and WhatsApp, removing the need to start copying and pasting your notes just so that you can share them with your friends. It’s a little time saver that, if it’s something you do often, can add up to make quite the difference over time.

Admittedly, Activity Pro might not be the first tweak everyone installs when they jailbreak their new device, but if you’ve a need for getting images or text into WhatsApp or LINE without going the normal route, then this tweak is for you.

You can download Activity Pro from the BigBoss repo in Cydia.