How To Add Gestures, Offline Reader Functionality, And More To Chrome For iOS

Google Chrome for iOS is one of the biggest releases we’ve seen so far for the iPhone, iPad and iPod touch. Maintaining a four and a half star rating on the iOS App Store and reviewed by more than a 1,000 users, it is definitely an instant success amongst the masses.

Although Chrome provides a great browsing experience out of the box on iOS, we are yet to see an app that truly achieves perfection from the get go. Google has been limited by restrictions which Apple places upon developers, meaning that they aren’t able to implement certain features which they probably would have liked. It is also true that they are guilty of just missing the boat on certain things and feature sets which should have been the part of the first release. 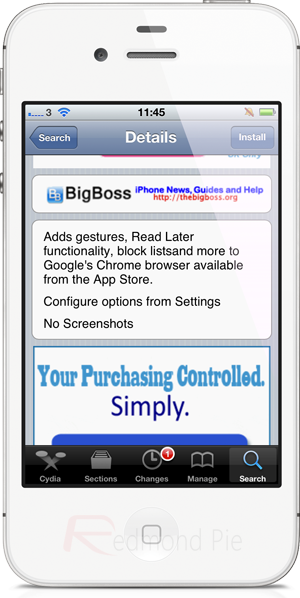 Thankfully, prominent iOS developer in the jailbreak community, Ryan Petrich, has made it his personal mission to make Chrome on iOS a better app to use for anyone who is jailbroken. His initial tweak, BrowserChooser, allows Chrome to be set as the default browser, and now his new package known as ChromeCustomization brings additional features and gestures to enhance the user-experience. 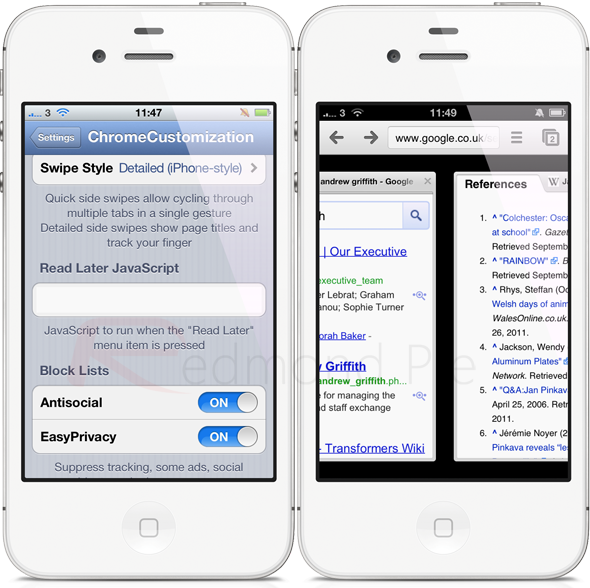 ChromeCustomization doesn’t bring with it any additional home screen icons and is instead totally handled and configured through a dedicated preferences panel in the native Settings app. The first setting is related to gestures and allows users to choose between the quick and dirty iPad style of gesturing between open tabs or alternatively use a more detailed iPhone swiping method. Privacy and blocking is also a pretty big part of this tweak, with Petrich including options that are intended to suppress browsing tracking.

Perhaps one of the most useful and powerful options of the package is the ability to apply some custom JavaScript which is initiated when the new Pocket (formerly Read It Later) button gets tapped, allowing webpages to be directly saved to a Pocket account for offline viewing. As you would expect from Ryan Petrich, the tweak is extremely polished, full of functionality and just works exactly as intended.

ChromeCustomization is available as a free of charge download from the BigBoss repository and requires Google Chrome for iOS to be installed from the App Store.